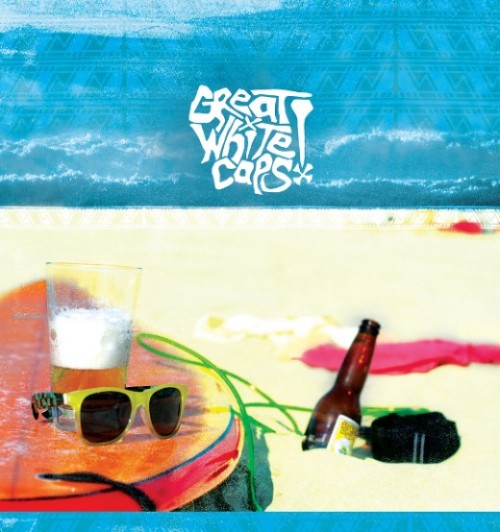 According to the number of dangling inchworms I’ve been unsuccessfully dodging recently, spring has sprung in my neck of the woods, and I’m hoping that warmer temperatures thaw the horrendous live music freeze-out I’ve been experiencing over the past few months. I’ve let opportunity after opportunity pass me by, but I’m ready to get back in the game, and the night before last, with about an hour to go before The Trillions showed The Camel why they remain one of the most explosive acts in town, Bandmate 4eva Doug and I took in a fantastic opening set by a Bethlehem, PA-based surf rock group called The Great White Caps.

I know we’re not all the way to true beach weather yet, and I know that decent wave-riding in Richmond is at least a few decades’ worth of global warming away, but on Wednesday night, with the first Friday Cheers looming large and the hopefulness of spring coating the city like a fresh dusting of pollen, the Caps offered a frenetic and reverb-soaked performance that was every bit as invigorating as it would have been to hop in my temporarily yellow Honda Fit, drive to Virginia Beach and jump in a 58-degree, early-May Atlantic Ocean. Just as invigorating was the clarity of The Great White Caps’ approach, which I found myself thinking about for much of their set.

Whether you’re watching them perform or scanning their online presence, one thing about the group is crystal clear: they are a surf rock band. They describe themselves that way, they dress the part — there was even a boogie board propped up against the monitors at the front of the stage — and the more I think about that, the more noble their conviction seems.

Genres are as fractured as they’ve ever been, and as a result, the worst thing you can possibly ask a musician is “What type of music do you play?” It’s an odious imposition, like giving your cat a bath or being called in for jury duty when you’re not in the middle of a good book. Yet here is a group who has chosen a formally strict yet visibly lighthearted style with 100% certainty, and they’re bringing to it palpable sincerity and creativity.

That last part — creativity — is what’s most astounding, because to-the-letter surf rock doesn’t provide the biggest sandbox in which to play. It’s easy to draw from (I realized at The Camel that I never really gave much thought to how much the genre informed Brad Nowell’s songwriting, though I do consciously appreciate what Richmond’s Black Girls take from it), but endeavoring to working within such specific parameters — quick, bright-sounding songs, guitar driven, tremolo-picked, 4/4, reverb-heavy — requires a special type of inventiveness. The Great White Caps’ ability to find interesting progressions and memorable melodies with so many limitations in place strikes me as especially heroic in an age where sampling and ProTools have infinitely expanded the musical universe, and seeing them on Wednesday brought into focus how downright righteous shrinking that universe can feel.

All formal considerations aide, The Great White Caps were loads of fun, offering a bright, breezy and highly energetic start to what I hope will be an action-packed warm-weather concert season. I invite you to brighten up your own Friday by sampling a pair of songs from their most recent full-length below.