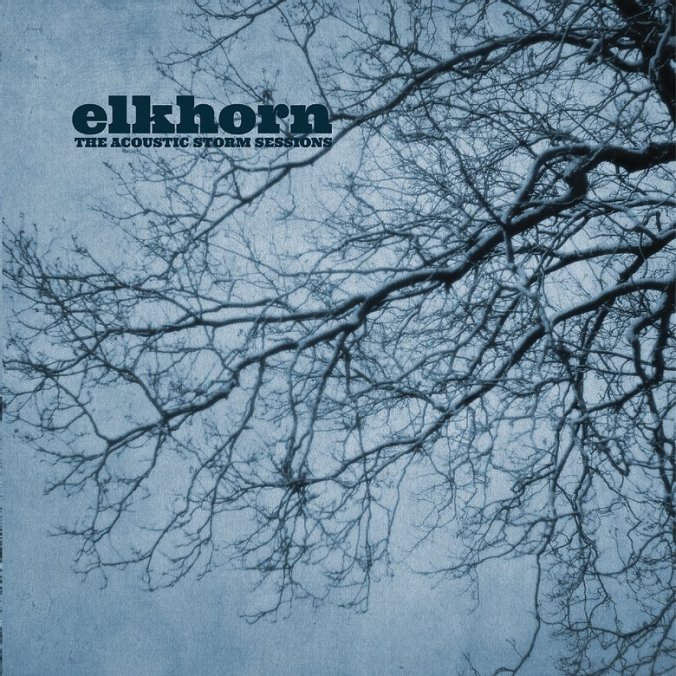 I’ve been leaning on music like never before these last six months. The records I’m spinning at home have been helping to drag my soul from one anxiety-ridden day to the next, and my copy of Elkhorn’s The Storm Sessions, which came out on physical formats in February, has been doing quite a bit of that heavy lifting. Its origin story is tailor-made for this frightful time; two side-long improvised pieces that represented the lemonade made when life gave the guitar duo of Jesse Sheppard and Drew Gardner lemons in the form a gig-killing blizzard. Snowed in with multi-instrumentalist friend Turner Williams, Elkhorn made magic. In turn, I’ve made it through this ordeal more emotionally intact than I might have otherwise.

Speaking of accumulation, I was recently organizing the records I’ve bought during COVID era — definitely more albums than usual, given the way ordering online provides a boost both in the present and the future — and I stopped when I got to The Storm Sessions. Should it sit with 2020 live albums, maybe next to that excellent Joan Shelley Live at the Bomhard set that came out a few Bandcamp Fridays ago? Should it hang out with conventional studio albums like Waxahatchee’s masterstroke, Saint Cloud? The sessions did take place at Drew Gardner’s home studio in Harlem, yet their searching sound and the circumstances that brought them about seem antithetical to the premeditation that defines the latter end of the live-studio continuum. Improvisation requires real-time reaction. It’s singular. There might not be an audience, but it’s as “live” as it gets.

Does it really matter where I file my records? No, but improvisation does matter. It’s what we’re all doing right now. Faced with a global pandemic, an economic downturn, and more time at home than even Daniel “I Like to Be With My Family” Tiger knows what to do with (don’t worry, he’s working through it), we’re being forced to adapt on a near-constant basis. Each day, we scan the most up-to-date dimensions of this weird and difficult situation, and we adjust, because not doing so would be like wishing the sky were green instead of blue, or wishing that it hadn’t snowed so much on the night you had a gig you were really looking forward to. Maybe it’s unsurprising that skilled musical improvisers made the most of a bad situation. (Maybe we could stand to follow musicians’ lead more often.)

To be clear, this isn’t about force of will, or about grinning and bearing it. Quite the opposite. It’s about a type of strength that can only grow out of an appreciation of one’s vulnerability — of the fact that being in the world means being changed by it. The most compelling music I’m hearing these days reflects the moment we’re experiencing, not just by addressing current challenges and opportunities lyrically, but also by letting our broken, unvarnished humanity show through. Whether it’s a collection of covers captured imperfectly on home recording equipment, or experimentation with new techniques and tools, I’m finding the most fulfillment in music that dares to document — faithfully — who we are after we’re knocked down but before we’re back on our feet. That’s certainly where I find myself these days.

It’s why I continue to find comfort in The Storm Sessions, and it’s why I was so thrilled to learn that The Storm Sessions has a companion album on the way. Elkhorn has teamed up with the Centripetal Force and Cardinal Fuzz labels to release an addendum in the form of The Acoustic Storm Sessions — another pair of side-long pieces improvised at Gardner’s home studio during that fated blizzard, captured the night before the recordings that made up the original album. This is Elkhorn’s first entirely acoustic album, and while Turner Williams does appear on these recordings as well, the tighter instrumental focus remains a compelling facet — a narrower passageway for a two-stage journey that’s no less ranging. The way the guitarists are able to draw in close to one another in spots affords the moments of contrast a whole other richness, and their expansion and contraction along that axis makes for rewarding listening wholly distinct from where they end up traveling.

Still, as with all of Elkhorn’s work, the “where” is such a gift. Oh, the places you can go while sitting and listening to Sheppard and Gardner (and Williams, in this case) build musical landscapes and chart winding, serendipitous courses through them, all while leaving you room to fill in your own imagined details along the way. I have a silly, wordless ritual for when I put on an Elkhorn album: I tend to imagine myself settling into a dream alongside one of the architects from Inception, ready to experience a world that transforms in front of my eyes. (The fun parts of the movie, minus all that stressful corporate espionage.) That ritual started as a result of an Instagram comment penned by James Adams of the Aquarium-Drunkard-hosted Bob Dylan bootleg show, Pretty Good Stuff. He concluded, “It’s like you can walk around inside this music and find new and instant friends. It’s a tonic.” So well put. If there were ever a time when we needed internal experiences that have the power to transport and connect us, this would be it. I suppose it’s ironic, then, to be so thankful these gifted improvisers were stuck in place when and where they were, but I am. Doubly so, now that we have these new acoustic sessions.

Click here to snag a copy of The Acoustic Storm Sessions in the US, here for the UK/Europe, and check out samples of both sides below.