Wanted to check in quickly and say something here that I said on the radio last Saturday when I joined Doug Nunnally for his Sound Gaze show on WDCE:

That’s the short version, at least. The long version won’t be all that long, but I did want to point out something that I think is really special about what Shovels & Rope are doing.

END_OF_DOCUMENT_TOKEN_TO_BE_REPLACED

This past Saturday, I had the pleasure of joining Doug Nunnally for an hour of his Sound Gaze show on WDCE. We had an awesome conversation — both while we were on the air and in between interview segments — covering everything from Fall Line Fest and Richmond music in general to the value of negative criticism and my Spotify stalking habit. I’d never been a guest on someone’s radio show like this (you’ll hear me exhaling before answers in an attempt to calm my nerves), but Doug asked really thoughtful questions and made the whole experience an incredibly positive one. Getting to talk to someone who loves music as much as Doug so clearly does is a rare treat, and I’m looking forward to the next time we can chat like this, be that on the radio or elsewhere.

Take a listen below — I come in around the 30-minute mark, but I recommend listening to the whole thing, because Sound Gaze is a great show and Doug’s a great host (he’s also a great writer — check out his recent Foo Fighters piece for rvamag.com here).

Big week, y’all. I’m writing this on Thursday night, immediately after confirming that my silver 64 GB iPhone 6 is still scheduled to be delivered sometime on Friday. Given that my current phone qualifies for not one but two recalls — one concerning a sleep/wake button that no longer works and the other concerning a battery that just kind of says “fuck it” and shuts the phone down randomly — you’ll understand why I’ve been looking forward to this Friday for some time.

…I might be even more excited about Tuesday’s Heigh Ho release.

END_OF_DOCUMENT_TOKEN_TO_BE_REPLACED

[cracks knuckles] OK, it’s been a hot minute since I wrote one of these blog things, so let’s see if I can remember how to do this. Band I feel strongly about? Check? Experience with that band I can’t not share with the whole damn Internet? Check. Picture to put at the top/song to put at the bottom? Check and check.

Let’s do this thing.

Landlady! Remember them? I wrote glowingly of their 2014 album Upright Behavior just before going on baby break. My feelings have only grown since. We shared a Twitter exchange about Spotify’s inadequate payout system, I ordered and received a special Coke-bottle-green pressing of Upright Behavior from Bandcamp, I got to see them perform last Friday night as part of the second-annual Fall Line Fest… it’s been a torrid affair — rewarding in ways I couldn’t have guessed it would be.

Mrs. YHT and I have been fairly bunkered-in lately, which shouldn’t come as a surprise to those of you who have kids and remember what that first month was like. In some ways, it’s felt like a month-long snow day — you huddle close, maybe start a new series on Netflix (we’ve knocked out more than three seasons of Friday Night Lights) and the most contact you have with the outside world some days is noticing the temperature of the air that rushes in when you open the back door to throw a can in the recycling. Much more of the outside world rushed in when I went back to work, but the snow day resumes every evening when I get home. It’s just as magical as an actual snow day, just replace the sense of spontaneous freedom with its polar opposite — a sense of responsibility you’ve spent months joynervously preparing to shoulder.

I love our little bunker, and I love that music has a physical presence in it. It’d be a stretch to lump my collecting vinyl for the last half dozen years into the nesting process, but those records are a non-minor part of the world Mrs. YHT and I prepared for our daughter, and that thought makes me very happy. I’ve gotten a huge kick out of choosing which records to play for Baby YHT. I waited until we got home from the hospital to open the copy of Lullaby Renditions of David Bowie I got last Record Store Day and made that the first record my daughter heard. She’s heard dozens since, and while I haven’t picked up on any nascent preferences, watching her facial reactions and knowing that every song she hears she’s hearing for the first time — I can’t even put it into words. I could do it all day every day and never get bored. (She might though — that kid’s attention span needs work.)

As amazing as the bunkered life has been, venturing out for Friday of Fall Line Fest was a real treat.

END_OF_DOCUMENT_TOKEN_TO_BE_REPLACED 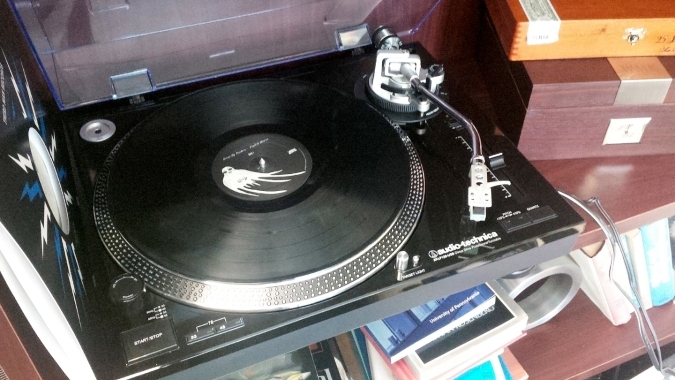 I thought a guest post might be a good way to ease back into the bloggin’ life after spending the last three weeks getting to know my new baby daughter, whom I may or may not have named after Beyoncé. Well, her middle name, anyways. That’s a story for a different day.

Today’s story was taken from an email exchange I had with Bill, the husband of one of Mrs. YHT’s lifelong friends and my partner-in-crime for the Drive-By Truckers show that took place at the National in March. I won’t offer too much of a preface, other than to say that his account of falling (back) in love with vinyl wonderfully articulates some of the key reasons why collecting records is so meaningful to me.