Here’s a link to the first EggHunt catch-up post if you’re curious, and here’s an all new one, featuring three exciting projects:

It really sunk in while I was listening to “Flee” for the first time that Landis Wine’s voice is Richmond to me, in the same way that the Boulevard is, or the river, or Bev’s. And it’s comforting knowing that if I ever moved away, I could still put on a White Laces album and feel the sense of place that I feel now. I’m excited to see him start a new chapter with Tori Hovater as Opin, and “Flee” leaves a great first impression. I’m especially fond of the build that ushers in the last minute of the song. Really neat. 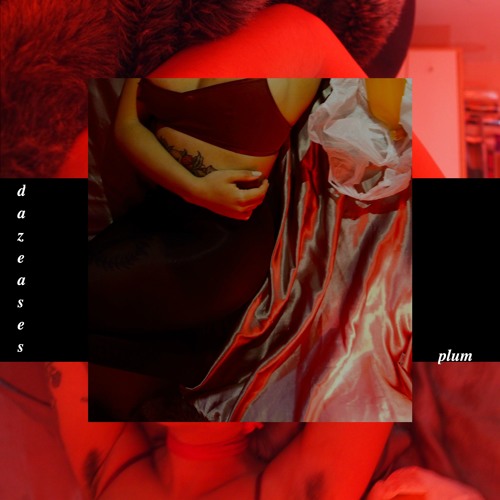 Speaking of distinctive Richmond voices, Dazeases’ has to be the most exciting new voice coming out of this city’s music scene. I’ve been digging into her catalog on Bandcamp, and I can’t recommend doing so highly enough. Her approach to production, vocals, performance… everything is entirely her own, and “Plum” promises continued inventiveness and gravity on her upcoming album, Local Slut, which will be released via EggHunt’s snazzy Hatched subscription series.

I’m not the best with time signatures. Does “You Became The Light” shift from 6/4 in the verse to waltz time in the chorus? Or is it 12/8? Are those relatively arbitrary designations? I don’t know enough to answer any of those questions. I’m just going to say that whatever Eric Slick (drummer for Dr. Dog) is doing here, I really like it. A verse that keeps you on your toes and a chorus that soothes for a few short moments before hurling you back into the madness… sign me up. 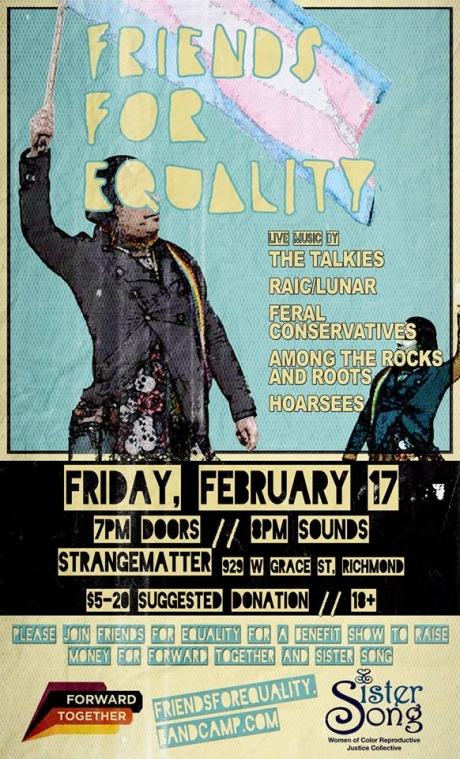 I posted a little while back about Feral Conservatives’ gorgeous track on the Friends for Equality compilation, which benefited the Southern Poverty Law Center, the ACLU and Planned Parenthood. I wanted to give the cause another quick signal boost, as a Friends for Equality benefit show is being held tonight at Strange Matter.

You’ll find a number of details on the flyer above (music starts at 8, $5-20 suggested donation), as well as the lineup, which includes those very same Feral Conservatives. This time, funds are being raised for Forward Together (“Our mission is to ensure that women, youth and families have the power and resources they need to reach their full potential.”) and SisterSong (“Sistersong’s mission is to strengthen and amplify the collective voices of indigenous women and women of color to achieve reproductive justice by eradicating reproductive oppression and securing human rights.”).

Doors are at 7, but you can start prepping now by clicking play on the 15-minute journey RAIC calls “Penance.” 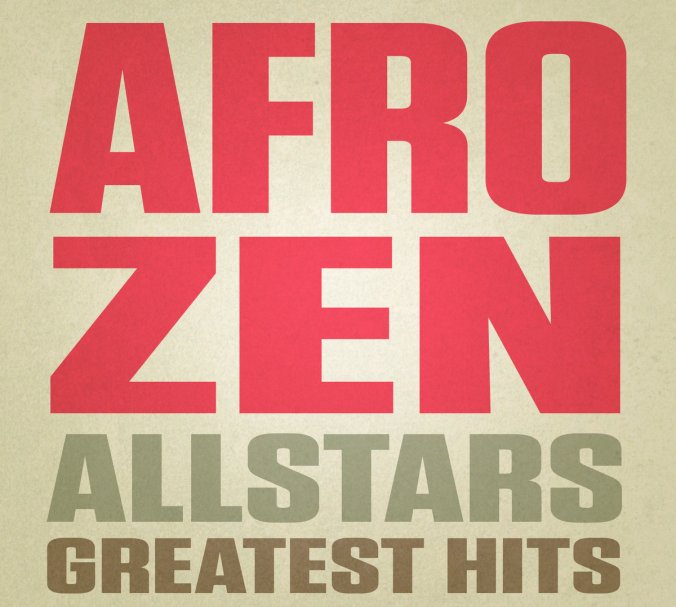 One of my favorite interview experiences  was talking to Richmond bassist Brian Cruse, whom I wrote about for River Ciy Magazine last year. The article was about a record he made with an ensemble he leads, but he’s also part of Afro-Zen All Stars, a group that derives inspiration from a “Golden Age” of jazzy Ethiopian music that was made in the 1960s and 70s.

If you haven’t heard their new Greatest Hits album yet, it’s well worth a listen. Check out the bass line Cruse lays down on the first track, “Cha Cha.” Steady as hell, funky as hell, groovy as hell. So easy to get lost in. The whole album has that quality.

I got the chance to see the band open for No BS! Brass Band’s 10-year anniversary show, but was near the back of the venue during their set. Can’t wait to see them again to get a closer look. And to get lost in some extremely groovy music.

Passing along a piece of advice Matthew E. White issued regarding your arrival time for his show tonight at The Broadberry:

The opening set will be played by Lonnie Holley, who is an artist in more than one sense of the word. Holley first gained recognition for turning reclaimed junkyard objects into arrayed sculptures on a massive scale, which he started to do when he was 29. More than 30 years later, he’s still in constant creative motion, and from the sound of the New York Times profile White tweeted out, creation isn’t just an impulse for Holley — it’s more elemental than that. Here’s a bit I found fascinating:

We were sitting at an outdoor table with a partly filled ashtray. Holley stopped talking to reach over and pluck out a cigarette butt, examining it as if he had discovered a rare penny in a handful of change. He asked me for a sheet of paper from my notebook, then tore apart the butt and affixed its cottony filter to a wooden coffee stirrer, also liberated from the ashtray. “This is called white oak,” he said. “It’s what they use to weave baskets and things, because it’s flexible.” He fashioned a miniature paintbrush and then painted a heart and the word LOVE using ashes mixed with a few drops of his iced coffee, the solution creating an appealing speckled-eggshell patina.

It wasn’t until later, but Holley started recording music in which looped elements backline winding and soaring image-based vocal storytelling. That same New York Times piece described how all of Holley’s musical performances are unique pieces — how he makes something new each time he addresses an audience. As a person who tries to write songs and feels lucky for whatever fleeting moments of inspiration I can hold onto, I’m in awe of the total paradigm shift Holley embodies. He doesn’t so much grasp at inspiration as he floats in it. Surrounds himself in it.

I can’t want to see what he has in store tonight. In his tweet, White called it a “rare event,” which I love, given the irony at work here: Everything Holley does is once-in-a-lifetime.

Lonnie Holley – “From The Other Side Of The Pulpit” [Bandcamp]

Foregoing news and notes because this isn’t just any Friday — today is the day Bandcamp is donating their cut of all sales to the ACLU, which strikes me as a completely kickass move.

My plan is to snag Landlady’s newest album, The World Is a Loud Place. I had a chance to see and hear a few of these new tunes when the band came to Hardywood in August — “Driving In California” for sure, and I think “Nina” and “Electric Abdomen” made appearances as well. It’s a fantastic album, every bit as imaginative, tightly executed, and soul replenishing as Upright Behavior. In fact, Landlady has become one of the bands –maybe you have a similar list — whose shows are more like exercises in spiritual fulfillment than just a pairing of people playing music and people watching those people play music. They’ll be at The Camel on March 6, and I highly recommend grabbing a ticket. If you’re like me, you could use some spiritual fulfillment right now.

In fact, I was having one of those days just yesterday. I bet you know the kind. Checking Twitter every few minutes and bracing yourself for the awful shit it would reveal. Feeling sad/angry/confused about how so much could be allowed to go so wrong so quickly. I’ve had days that weren’t one of those days since January 20, but they’re the exception. Sad/angry/confused has become my new normal, even though I’m committed to the fight to keep intolerance from becoming America’s new normal.

You know who else is? The good people at the ACLU, and seeing that Bandcamp was doing what they’re doing today snapped me out of yesterday’s daze. I couldn’t wait to write this post and chip in.

Here are a few of the RVA bands and labels who are going a step further and pledging their own share of song/album sales to the ACLU:

And then there’s Lightfields, who have been donating their Bandcamp sales to Planned Parenthood for some time now. Richmond is full of amazing people. If you’re a band or label in town and I left you off the list above, please let me know so I can include you, because you’re awesome.