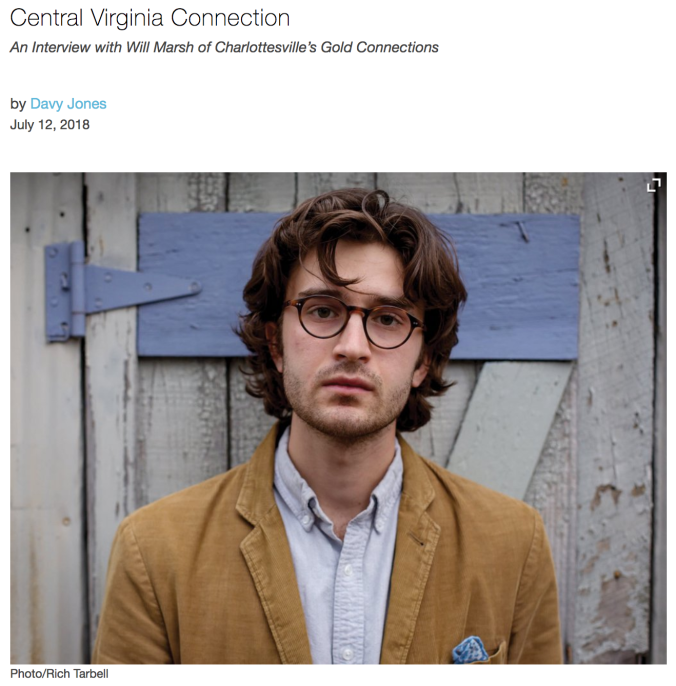 I’ve lived my whole life along the I-64 corridor in Virginia — Norfolk until I graduated high school and then Richmond for college and beyond. It’s a stretch Gold Connections frontman and leading creative force Will Marsh knows just as well, given his Charlottesville roots and his time spent at the College of William & Mary in Williamsburg. His drive between home and school probably wasn’t too different from mine — between an hour and a half and two hours if the traffic was kind. Worse on summer weekends when the Outer Banks were in business.

We had the opportunity to speak over the phone early in June. The first full-length Gold Connections album, Popular Fiction, had come out a few weeks before, giving me more than enough time to fall hard for Marsh’s writing and knack for studio decision-making. I’d also gotten a kick out of tracing the way standout tracks like “Salt” and “Isabel” evolved from versions he recorded in 2014 with W&M contemporary Will Toledo of Car Seat Headrest for the self-titled Gold Connections EP, which didn’t end up being released until 2017. Hearing more about how those two projects took shape and the tremendous care Marsh puts into how his music is presented was really interesting, and it got me thinking about I-64. Whether long or short, there’s something sacred about the time between recording and releasing music. How many times did those songs provide a uniquely private soundtrack to a drive along that stretch of road? What else might the people next to us on the highway be carrying with them? What hopes, problems, and creations?

All that said, Marsh is looking and driving squarely forward, with an outstanding debut LP and the backing of Richmond’s EggHunt Records. Click here to read the River City Magazine article I wrote about our conversation. It’s in the inaugural issue of River City as a standalone publication, and I’d love it if you grabbed a copy around town or checked it out online. You can hear yet another version of “Isabel” below, from a Bridge Room Session I’d recommend highly.