Jeremy Gordon wrote a great article for Pitchfork recently that talked about early interweb fandom through a Radiohead lens. It showed how especially devoted fans can go from listening to creating, with At Ease as a prime example. In a coincidence that’s too meaningful to call purely coincidental, just a few days later, I got an email from James Adams, who has created a stunning zine — Daniel Bachman’s Commonwealth — devoted to Bachman’s body of work. It uses Bachman’s song titles as a jumping off point for exploring the history and geography of Virginia, with detailed looks at small towns and rivers and even a map with a legend that pinpoints areas Bachman writes about. 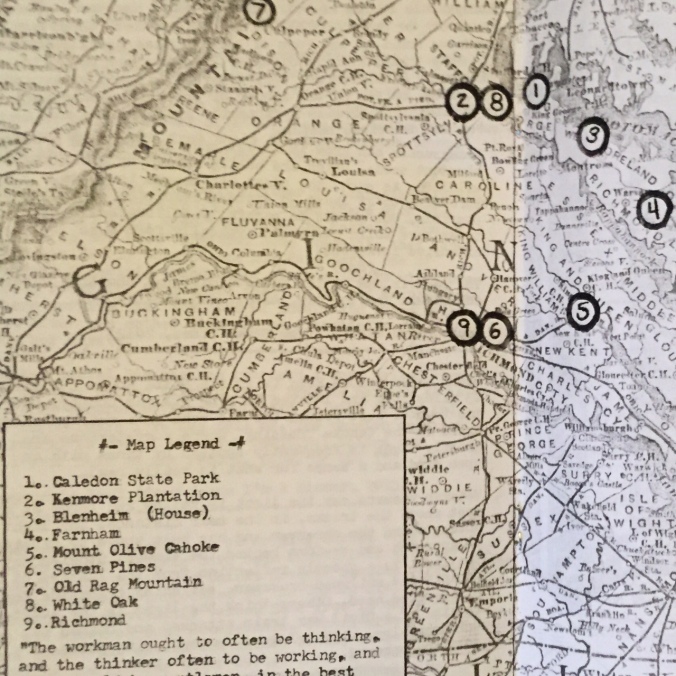 There’s insight, there’s humor, and there’s a shit-ton of information. Here’s the passage about Farnham, which is the namesake of one of the songs on Bachman’s excellent River album: 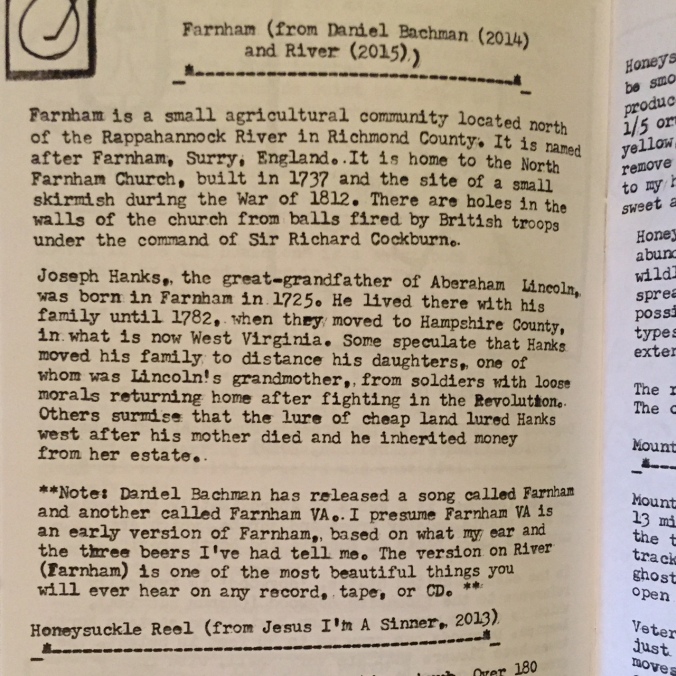 And I’m pretty sure the back cover is the most fantastic untapped tattoo idea I’ve ever seen. (If you do have this tattoo, I’m jealous of you): 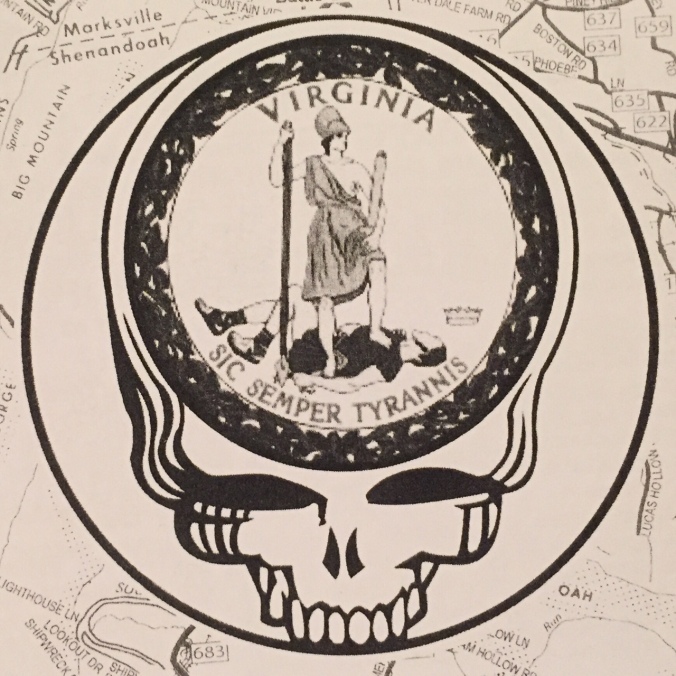 I’m so happy I have it, and James was nice enough to send a couple extras. If you’d like a copy, let me know. It’s not just for Daniel Bachman fans — if you’ve lived in Virginia your whole life like I have, it’s a true gift. (And if you’re a Dylan fan, James’ Bob Dylan Studies twitter feed is a required follow.)

I’m enjoying this new Doll Baby EP. Funny that the tides of 2016 have washed two “polliwog” references ashore. The first track on Sturgill Simpson’s new album is called “Welcome To Earth (Polliwog),” though he’s referring to an inexperienced sailor, whereas Doll Baby may have actual tadpoles in mind. Not sure. Fantastic word either way.

You know what else is great? “Drift.” Lots to like here: Vocals that dip and rise with that combined sense of style and purpose that makes Marissa Paternoster’s singing so compelling, a great drumming passage at the 2:00 mark, guitar sounds that levitate in the verses and swiftly crash down in the choruses… My brain wants those thunderous moments to last longer, but the brevity of that payoff is part of what keeps me coming back. MUST HEAR THOSE TWO MEASURES AGAIN. AND AGAIN. AND AGAIN.

I keep finding myself listening to “Drift” at the intersection of Staples Mill and Dickens, for whatever reason — waiting at that light and looking over at the Comcast building, with that ridiculous shrub area that runs along the front, like the building has a big, green mustache. It’s on the way to daycare, so Toddler YHT is probably developing the same insatiable appetite for the song. Not sure if she has an opinion on the shrubbery.

Check out the rest of the Doll Baby EP here, and if you’re digging them, you can hear a live track (I’ve heard they’re excellent live) on Polliwog producer Bryan Walthall’s latest installment of the Live from G5 series, which is now three volumes deep.

Another Toddler YHT pick. OK, so she was indiscriminately pulling CDs out of the rack, but once she’d assembled her options, she was resolute about this one.

I actually got to see some of these songs performed by an orchestra at Bonnaroo in 2004. I remember waiting around for what seemed like forever and wondering what the hell was happening onstage, and while it wasn’t perfect — I think the strings struggled with intonation because of the heat and humidity — it was a neat experience. Definitely a fish-out-of-water moment, both for Trey, who was taking a risk performing that style in that setting, and for those of us in the audience: I’m not sure how widely known this plan was, but I couldn’t have been the only one who showed up expecting to see a bunch of noodly guitar solos. That kind of friction doesn’t come about without a fair amount of bravery, and that bravery is a big part of why I look back on that performance (and this album) admiringly.

It’s a grab bag stylistically. Some great Copland-y passages, though, and “The Inlaw Josie Wales” is sweetly done. I’ll report back later in the week about “Guyute” — interested to see if this version is as epic as it seemed when Phish was in more regular rotation.

I’m having a really hard time breaking out of my Brexit WTF stupor, but here is a picture of my daughter wearing a hat that’s way too big for her, and here are a few news and notes items, for what they’re worth: 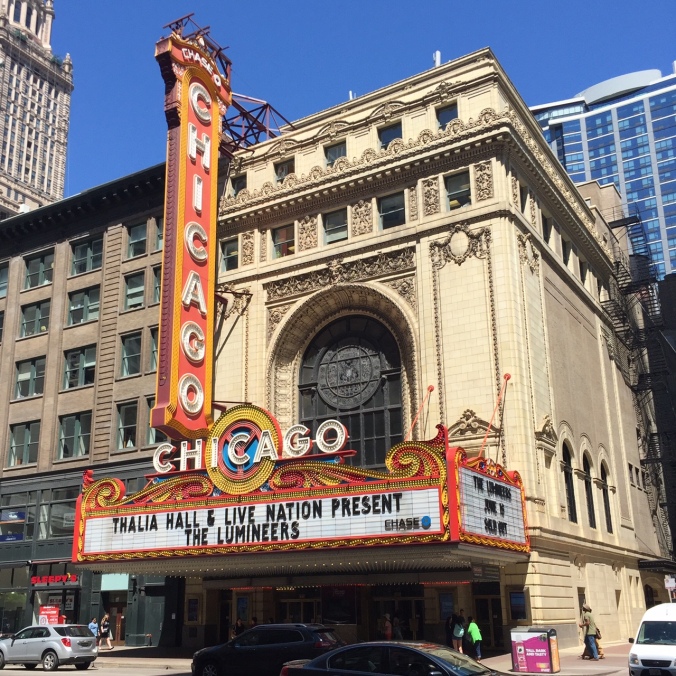 Was just in Chicago for Mrs. YHT’s brother’s wedding, and I managed to sneak in a couple record store stops.

I struck out at the Madison Street location of Reckless Records — just a few blocks down State Street from our hotel — on Friday afternoon, but I took advantage of a free hour on Saturday morning by Ubering over to Dusty Groove, which was a couple of miles away. I had to hurry, which was unfortunate, because their jazz section was something to behold. Dozens of albums behind each alphabetical divider. I’ve become monomaniacally focused on finding this one Chico Hamilton album — El Chico, thanks to AnEarful — and they didn’t have it, but I would have happily flipped through every jazz record thy had, just to take in the panoramic beauty of that kind of collection. 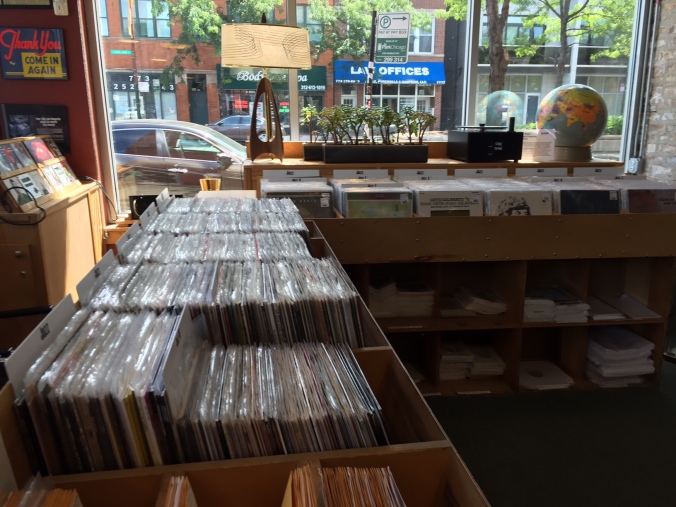 I quickly poked around elsewhere. I ended up passing on a new repress of Max Richter’s Songs from Before, which will probably haunt me, but I did latch onto a copy of the posthumous Allen Toussaint album that just came out. I’ve been listening to it via Spotify a bunch, both at work and at home. I first gravitated toward “Mardi Gras In New Orleans,” a song I played repeatedly in the hotel room while Mrs. YHT and I were in New Orleans in December. That was Professor Longhair’s upbeat version, but this version is slower, almost elegiac. Really affecting, especially given Toussaint’s recent passing. 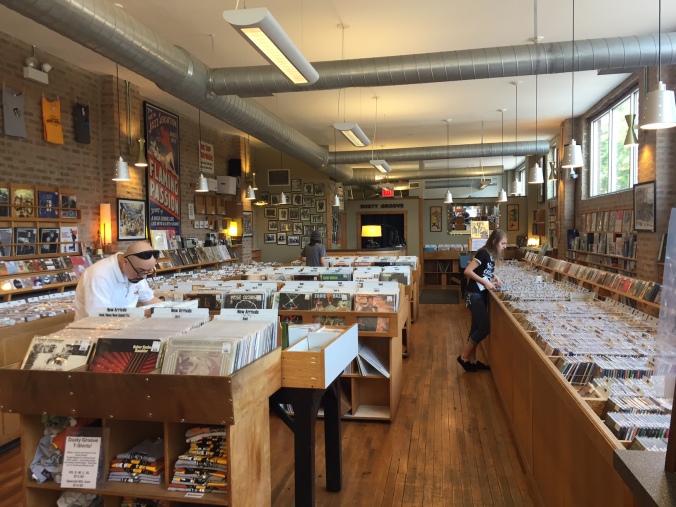 The other song I’ve gravitated toward is the cover of Paul Simon’s “American Tune.” It suits Toussaint’s soft voice, and having a hard copy of that song might have been justification enough for buying the record and schlepping it all the way back to Richmond, but Side D sold me. The three bonus tracks — not available on Spotify as of yet — including two extra Longhair tunes and “Moon River,” which tends to rip my heart out of my chest every time I hear it. I’m typing this on the plane ride home, so I haven’t listened yet and don’t know if it’s instrumental or if Toussaint sings those sweet, fatalistic lyrics. If it’s the latter, I may never recover.

Part two of the Marcus-led exploration of Mudcrutch. The album is called, fittingly, 2. I’ll report my findings on Friday.

Yesterday was a pretty dark, emotional day, and the sadness I feel in association with what happened in Orlando isn’t dissipating. I feel hungover, really, but it’s not the type of hangover that goes away with Advil.

I thought about skipping CD Monday, but I’d like to instead share an album (Nelly Kate’s Ish Ish) that I find very helpful when it comes to emotional processing, which is an important part of the aftermath of horrific events like Sunday morning’s. Regardless of whether you lost someone in that club, got scared half to death because you have friends who were in Orlando at the time, don’t know a single gay person but just really don’t want the government to take your guns away, or you’re overwhelmed thinking about the disproportionately large effect a single small mind can have… I’m certain that everyone can benefit from honest introspection about what comes next.

Find the corners of your mind. There just might be nuggets of truth — newfound clarity or unexpected empathy — in those places that can help us all move forward from this. Not away, but forward.

Lots of fun stuff to check in about:

I’ve had occasion to write this post a number of times, but this Oxford American piece about Hiss Golden Messenger from a couple years back is just such a great example of why I love Amanda Petrusich’s music writing, and I’d like to point out two quick things:

Thing 1: In every AP piece, there are sentences that are put together so perfectly and are so insightful that I stop reading and physically look around to try to figure out what to do next. Do I read it to the person nearest to me? Do I tweet a link to the article and quote that line? Do I take up engraving so I can engrave it on something? Here’s one from the HGM article:

If you think about art long enough—what’s good and why, how it works on you—it becomes clear that every argument for or against a work is predicated on the notion that we’re all capable of saying something true.

The whole article is great, and that section is particularly incisive, but holy crap — that sentence totally stopped me in my tracks, and I decided I had to write a post to finally satisfy this “I have to do something!” impulse that’s hit me so many times before. So here we are.

Thing 2: I savor Petrusich’s music writing like fiction. There’s almost always a moment while reading an article she wrote when I realize that I don’t want it to end, scroll to the bottom to see how much is left, and portion out the rest deliberately, so I won’t accidentally wolf it down too fast. I felt similarly about her Do Not Sell At Any Price book, which I’d recommend buying before you finish reading this post, if you haven’t already.

That’s it. I don’t mean to go on and on, I just (as described above) had to say something. Do yourself a favor and keep an eye out for her articles in The New Yorker and elsewhere. They’re consistently fantastic.

Quick non-bloggy writing update: Boomer Magazine gave me the opportunity to write an article about FloydFest, which is taking place from July 27-31 this year. I hope you’ll check it out — talking to Across-the-Way Productions marketing director Sam Calhoun was a blast, both because of his enthusiasm for the festival and because of his clear love for the bands they’ve booked. (The conversation was also thrilling because I managed to drop my voice recorder in a cup of ice water just minutes because he called, and arranging a backup recording situation resulted in a not-insignificant amount of adrenaline.)

One of the bands I was most excited about after our conversation was Nathaniel Rateliff & The Night Sweats. I remember seeing their self-titled album’s cover in 2015 when it came out — How could you forget that A+ chest hair? — but I totally whiffed on giving it a listen back then. I’m on board now though, and they’re one of the bands that make this year’s FloydFest lineup so outstanding. There’s also Gregg Allman, Warren Haynes, Bruce Hornsby… it’s looking like a great time.

Tickets are still available, so check out the article here, listen to Nathaniel Rateliff & The Night Sweats below, and click here for more info on the festival.