Each night, I read to my daughter from a series of books entitled Good Night Stories for Rebel Girls. I’d recommend it highly to anyone looking for a new bedtime reading routine. The stories are consistently inspiring, and there’s one I keep thinking about when listening (and repeatedly re-listening) to Gold Connections’ new song “Iowa City.”

We owe our understanding of plate tectonics and continental drift in large part to an American geologist named Marie Tharp, who painstakingly compiled sonar measurements and seismographic data to chart the topography of the Atlantic Ocean floor. To that point in history, people thought it was a flat slab of mud. No rift valleys or trenches of terrifying depth. Just… mud. It’s amazing how spectacularly wrong we can be before someone like Tharp comes along and puts the pieces together for us.

Every time a place is named in “Iowa City,” from the title city to New Mexico, Albuquerque, and Santa Fe, I hear the “ping” of a sonar reading. All the places we visit, all the people we get to know, all the conversations with those people… they’re all readings that end up forming the topography of our selfhood. We bounce off the world, and in turn, we’re shaped by it. And the more we listen, the more our capacity for understanding expands.

“Iowa City” is a breakup song with layers; Gold Connections frontman Will Marsh has said it concerns both an actual breakup and the sudden stop to touring that came with the onset of the coronavirus pandemic. A feeling of loss is present throughout, with lyrics like “It’s just the way it goes” and “What else can I do,” and harmonica that sounds distant, as if it’s coming from a past that’s receding from view. Meanwhile, the references to driving offer bitter reminders of how the vans that should be hauling amps and snare drums across the country are parked in driveways and rental car parking lots.

The road may go on forever, as Robert Earle Keen famously put it, but we’re not always on it. It strikes me that the current shutdown means our sonar readings are internal. Cut off from new places, people, and experiences, we’re left to map the trenches of our present and past. I have to think that’s a factor in this moment of collective reckoning we’re experiencing around racism, Confederate monuments, and police brutality. In ways that are both personal and political, so many people are putting the pieces together to draw a new map of what America really looks like. I think Marie Tharp would approve.

Speaking of the ongoing demonstrations around race and policing, there’s another great reason to download “Iowa City” today: Sales through the end of June are being donated to the National Bail Fund Network in “solidarity with everyone fighting on the front lines for racial and economic justice in America.”

I’d also recommend checking out this gorgeous lyric video for “Turn,” one of the tunes from last year’s excellent Like a Shadow EP.

A quick heads up for cassette-lovers out there: Physical copies of Shormey’s bright and utterly brilliant God Bless Bob Ross: A Collection Of Low Fidelity Recordings are now available over at Citrus City’s Bandcamp page.

As you can probably tell from my last few posts, I’ve been celebrating Bandcamp’s recent fee waiver events enthusiastically, and since those Fridays can feel somewhat frenzied, with new releases popping up left and right throughout the day, I’ve started making retrospective mixes to unpack all the beautiful chaos.

The hardest thing about making a mix in honor of Bandcamp’s June 6 event was deciding which track from God Bless Bob Ross to include. The whole thing is stellar. I ended up going with “honeydipper,” which is intoxicatingly propulsive and wildly inventive in how it builds and releases its kinetic energy.

Take a listen below, and click here to snag a copy on cassette. $2 from each sale goes to Chicago’s Brave Space Alliance.

It’s another great day to buy from Bandcamp, y’all. In honor of Juneteenth, the benevolent music marketplace is donating its share of sales to the NAACP Legal Defense Fund. (And they’ve pledged to do the same each Juneteenth going forward.)

I’m filling up my shopping cart now, and I’m planning to update the list of recommendations at the bottom of this post throughout the day. For now, I thought I’d pass along a heads up about a great 7-inch Cass McCombs and Steve Gunn just released. They’d hoped to sell it on a west coast tour, but since that run was canceled, they’ve made it available on Bandcamp. It pairs a Gunn-sung take on the traditional tune “Wild Mountain Thyme” with a cover of Michael Hurley’s “Sweet Lucy” (a song I hold near and dear — my daughter’s humming along to it as I type this) sung by McCombs.

You can hear both of those tunes below. And here are a few other items I have my eye on:

It’s time for another installment in Bandcamp’s series of fee-free Fridays, though this month’s event has an elevated sense of purpose amid the Black Lives Matter demonstrations happening all over the country. While Bandcamp started waiving its revenue share once a month as a way to generate income for artists who have been negatively impacted by COVID-19 and social distancing, several bands and labels are pledging some or all of today’s proceeds to organizations working toward racial justice, including the National Bailout Fund, Reclaim the Block, NAACP Legal Defense & Education Fund, and many more.

Whether you’re supporting black artists directly or pledging funds to the organizations listed above, there are so many great (and great sounding) ways to show your support during this pivotal moment. Here’s Bandcamp’s official list, and here are a few recommendations of my own: 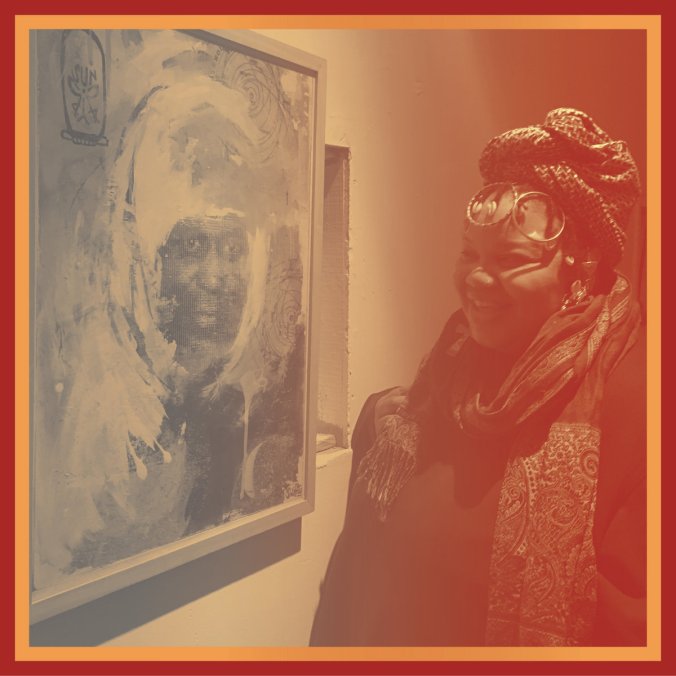 Back in May, the composer, clarinetist, singer, and “spiritual jazz soothsayer” Angel Bat Dawid released a pair of new tracks — “Transition East” and “No Space Fo Us” — with the option to buy a vinyl/book/poster bundle that includes an outer space grey 7-inch, a copy of Emma Warren’s book Make Some Space, and a poster that bridges the two. “Transition East” was originally conceived as accompanying music for the audiobook version of Make Some Space, which tells the story of the dynamic London DIY music facility and community called Total Refreshment Centre. (Dawid and Warren met there in 2017.) What a beautifully rendered collection this is. And what beautiful music this is. 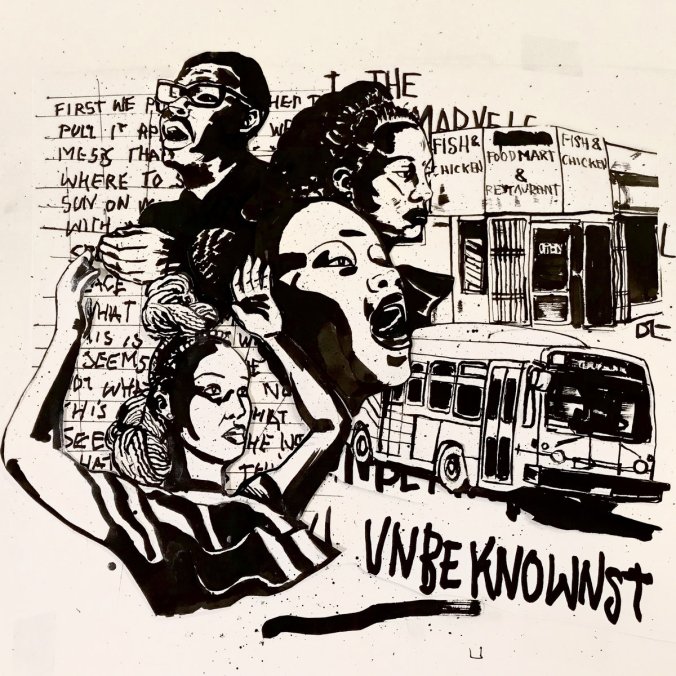 Angel Bat Dawid is also part of International Anthem labelmate Damon Locks’ 15-piece Black Monument Ensemble, which released the stunning Where Future Unfolds LP in 2019. Can’t recommend that one highly enough. Same goes for “Stay Beautiful,” which was recorded live in November of 2018 at Chicago’s Garfield Park Conservatory and released a couple of months ago as a single. It’s a tale of layered meditation, from the spoken poetry to poetry in motion (video available here), backed by Dawid’s pulsing clarinet and culminating with a cappella repetition of the title phrase.

McKinley Dixon — The House That Got Knocked Down

If you thought the Angel Bat Dawid thread in this post was finished, not so fast. Richmond-based artist McKinley Dixon released The House That Got Knocked Down in March, and as it turns out, Dawid is a fan of Dixon’s work. The clarinetist had this to say about “Sun Black,” the third track on the EP:

McKinley Dixon is an incredible MC. His new album… is full of laid back vibes, soulful beats and powerful delivery. I met McKinley at a film festival and we became great friends. When he told me that he had a new album coming out I immediately downloaded it when it was released and was completely blown away!

I had no idea this connection existed when I started working on this post. True story. I also recommend picking up Dixon’s entry in Saddle Creek’s Document Series.

Sahel Sounds has a great thing going with its Music from Saharan WhatsApp series, which shares music recorded in the Sahel directly to cell phones. It’s immediate. It’s direct. There’s such electricity to seeing a new set of recordings pop up, knowing they’re unfiltered but not knowing what you’ll hear. This month’s featured artist is Amaria Hamadalher, and while I have heard her play before, it’s been with the group Les Filles de Illighadad. Excited to start exploring her work outside of that context. And can we all agree that this cover art is amazing? (I believe it’s from a shot that appears in the first issue of Third Man’s new Maggot Brain magazine, which is excellent.)

Speaking of Sahel Sounds, Mdou Mactor released the first volume of this new mixtape series for the May 1 Bandcamp day, and it’s a keeper, mixing various live and acoustic recordings into one long track in a way that feels organic and alive. Speaking of “alive,” Moctar’s guitar is a live wire as always. Brings me back to the frenzied feel of his live shows at Strange Matter and Gallery5 over the past few years. While he may not have been able to perform at Friday Cheers this year as scheduled, these mixtapes are a great way to get a sense for what his sets are like.