Yes, Wednesday was mainly significant because of the inauguration of a new president and vice president, but I have to imagine it’ll also go down as a truly great Internet day. The text chains with friends and family.  The wonderment at Amanda Gorman’s recitation of “The Hill We Climb.” The first wave of Bernie memes. Truly top-shelf stuff.

That said, one moment of celebration stuck with me longer than the rest, and that was the cover of the Grateful Dead’s “He’s Gone” that M.C. Taylor of Hiss Golden Messenger posted to Instagram. Click here to have a look, if you haven’t already seen it. I can’t embed it here, but it’s well worth a watch.

Coincidentally, I also started Inauguration Day with the Dead. I asked my three-year-old son to pick an album for us to listen to while I made coffee, and he ran over to my records and grabbed the “Skull and Roses” album. I dropped the needle and quickly got a chuckle out of how fitting it was to greet the last day of Trump’s presidency with “Bertha,” given the last line of its chorus: “Bertha don’t you come around here anymore.” It’s quite possible, I learned later, that the song was playing at the very moment Trump was boarding Marine One. Now that’s a happy thought.

M.C. Taylor’s restrained but undeniably joyous version of “He’s Gone” was much more meaningful, though, and it’s an illustration of how flexible songs are when it comes to meaning. (That can be a bad thing, as we know all too well from Republicans’ use of “Born in the U.S.A.” at campaign events, but that’s a whole other story.)

The Dead debuted “He’s Gone” on a Danish TV show in April of 1972, and a performance of it from less than a month later would appear on the celebrated Europe ’72 live album. It was written as a sardonic tribute to the band manager (drummer Mickey Hart’s father) who absconded with more than $100,000 of the band’s money, and it sounded jauntier out of the gate than it would become. Over time, the tempo slowed, and that spaciousness lent sincerity as the song became a vessel for mourning. March 19, 1973 was a turning point in that sense — that performance of “He’s Gone” followed Pigpen’s death by less than two weeks, and the song’s significance began to swell. (“It became an anthem for Pigpen,” Dead lyricist Robert Hunter noted in 1991, and some fans would even erroneously peg Pigpen as its inspiration.) The version from the Mississippi River Festival in August of 1980, less than a month after Keith Godchaux died, is another moving one, as is the “He’s Gone” on Dick’s Picks Volume 9, which featured one of the first shows after the 1990 death of Brent Mydland. It’s hard to imagine being in the audience those nights and not thinking about those (very) recently departed one-time band members, even without an explicit dedication. The verses don’t address mortality directly, and they’re less sympathetic than an intentional elegy might be, but the chorus packs a serious punch when it comes to confronting loss:

Within the context of death, the directness there is almost jarring. “Deal with it,” it seems to say. It’s even more brutal in light of all the experience the group accrued in the area of forging ahead while grieving bandmates who died young. But there’s a kindness to Jerry Garcia’s voice that blunts the impact, giving it the feel of a come-to-Jesus conversation with someone who’s been though this before, and who cares deeply about you. The tough love you needed, whether you were ready for it or not. We don’t often get to choose when we say goodbye, and “He’s Gone” is the rare vehicle for collective grief that challenges listeners at the same time that it comforts them.

Fortunately, we do get to choose when we say goodbye to presidents. (Democracy! It’s pretty great!) Things may have felt a little less certain than usual in the hours leading up to President Biden’s inauguration, given Trump’s refusal to concede and the insurrection, but therein lies the unique pleasure of singing this song in this moment. “How could I not play this song today,” Taylor asked before beginning his rendition. And how could I not watch several times in a row, grinning along to the “Nothin’ left to do but smile, smile, smile” line, and taking comfort in the chorus’ embrace of absolutes? The repetition scans differently right now — less like frankness and more like pinching yourself to make sure you’re not dreaming. The erosion of objective truth has taken its toll on everyone, not just the neighbors and uncles who have been ensnared by conspiracy theories, and it’ll take time to recover from four years of having to labor — often in vain — for acknowledgement of that which is plainly obvious. Hearing the words “he’s gone” sung over and over is a little like a bearded Robin Williams hugging you and saying “It’s not your fault” until it finally sinks in.

Taylor’s Instagram post did take issue with the “Nothing’s gonna bring him back” piece, saying, “It’s all too clear that that everything the so-called former President embodies, the cancerous cells present in our political system, will definitely come back if we’re not diligent.” As much as it feels like we can breathe more deeply with an actual adult in the White House, it’ll take time to tune out the baseline hum of concern that became a constant companion these last four years, especially with the pandemic still raging. And I’m with Taylor in thinking that we need to put in the necessary interpersonal, political, and legal work to ensure he’s truly gone for good. Still, it’s pretty damn satisfying to sing along with the chorus of “He’s Gone” and allow yourself to believe every single word of it, even if it’s just for the length of the song. (Conveniently, the running time regularly surpassed the 10-minute mark.)

A little later in the day, with texts and memes still rolling in, I got ready to go for a run. The Grateful Dead have been a regular part of my running routine since the early days of the pandemic, when I started making my way through the 36 from the Vault podcast — an in-depth, album-by-album companion to the 36-volume Dick’s Picks series. I’m currently on Dick’s Picks Volume 15, and before picking the album up where I’d left off from my last run, I thought about how amazing it would feel to hear “He’s Gone” on this particular night. I try not to look ahead at the track lists, in hopes of replicating what it would have been like to experience the shows in real time, but I was tempted to look this time. I’m so glad I didn’t. After making my way through few leftover minutes of “Eyes of the World” and an energetic “Samson and Delilah,” I heard exactly the intro notes and tempo I was looking for, and a glorious, 14-minute “He’s Gone” unfolded like an overly generous gift from the universe. Talk about needing to pinch yourself.

About halfway through my last mile, I hit the song’s coda, in which the the lyric M.C. Taylor urged caution over — “Nothing’s gonna bring him back” — is sung repeatedly in three-part harmony. Dick’s Picks Volume 15 pulls from a show that took place in Englishtown, New Jersey on September 3, 1977, and that night’s crowd came ready for the “He’s Gone” coda, clapping and singing along, becoming part of the song in a way that reminded me of the function of community in making good on the new meaning of that phrase. “Nothing’s gonna bring him back” is a promise we have to make to one another. While reflecting on that, I neared a house that I knew had kept its Trump 2020 flag up well after the election had been called, wondering if that too would be gone. It wasn’t. We are still firmly in the “broken American moment” Taylor described in his moving song “I Need a Teacher.” Putting things back together — beating the pandemic, restoring a commitment to facts, rebuilding burnt relational bridges — will be hard work. And that work will require all of us.

Maybe not you-know-who, though. He’s gone.

Listen below to the Englishtown rendition I encountered on my run, click here to check out M.C. Taylor’s version, and be sure to also give a listen to the recently released Hiss Golden Messenger single, “Sanctuary.” 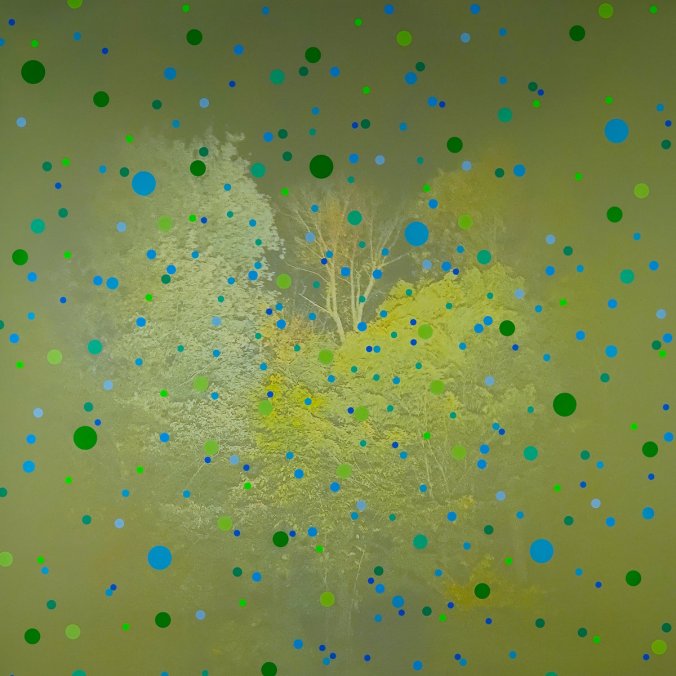 The Baader-Meinhof phenomenon is feeling pretty phenomenal at the moment. Four Tet is everywhere I look.

It all started with the two (very good) songs he released in collaboration with Thom Yorke and Burial in mid-December, “Her Revolution” and “His Rope.” I’ve listened to “Her Revolution” countless times since. It’s a Lay’s potato chip song; I can’t listen to it just once. I need to hear it again the moment it ends. It’s too good.

Around the same time, I read about Four Tet’s work on the upcoming Madlib album and got similarly hooked on the two tracks they’ve shared from that so far, “Road of the Lonely Ones” and “Hopprock.” (Feeling very fortunate to have squeezed an order in amid the hailstorm of web traffic when the presale went live the other day.)

I also saw that Four Tet released two new albums of his own over Christmas, and I was in the process of checking one of those last weekend when the strangest thing happened. While I was making my way through the first track, I hit pause to check out a YouTube link DJ Mentos had kindly sent my way — a haunting and groovy tune called “Tales Of Mystery” that appeared on a 1981 compilation of Hawaiian high school bands. (Mentos is a master of unearthing that type of buried treasure.) When that song was over, I restarted Spotify and sunk back into the sounds of Four Tet, not realizing for several minutes that I’d left YouTube open to autoplay another video. What did YouTube choose to play next? The very same Four Tet album Spotify was playing; I was unknowingly hearing different parts of the same song on two different laptop applications. Weird, right? What are the algorithmic odds? Then I remembered the name of the album I was checking out. It’s called…

I shit you not…

If you’ve heard its spacious, atmospheric first track, entitled “Parallel 1,” you might understand how that accident could fly under the radar. It’s gorgeous, with tones that appear and disappear like fireflies, and two layers of it can coexist beautifully, depending on where you drop in with the second. I’ve included both Bandcamp and YouTube embeds below so you can perform your own parallel listening experiment. If you’re reading this on a phone, it probably won’t let you play audio from multiple apps at once, but “Parallel 1” is well worth putting in your ears either way. 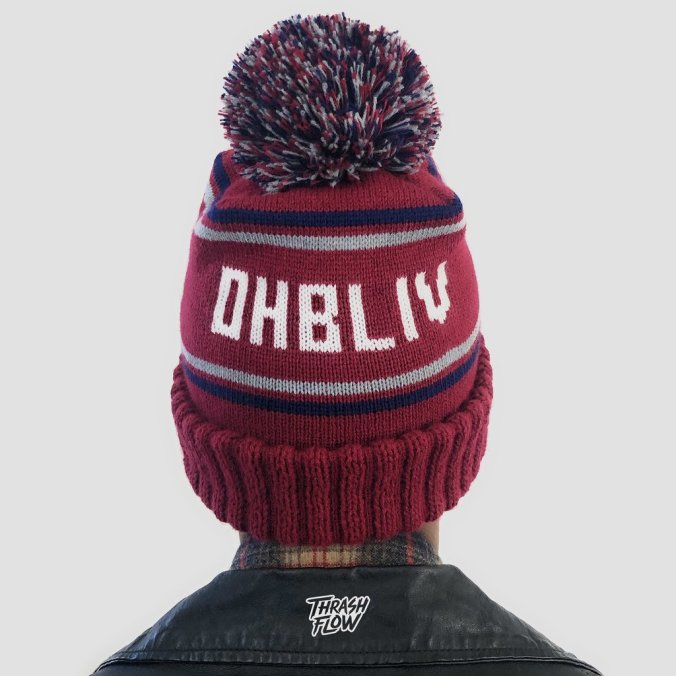 Important merch alert: The Ohbliv beanie is back.

If you’re like me, you’ve been scouring the Internet on a regular basis for restocks of those legendary green and blue winter hats bearing the great Richmond beatmaker’s name. Maybe you were even periodically searching eBay, hoping someone decided to sell theirs. If so, good news: Thrash Flow’s site has version 2.0 in stock now, complete with a new color scheme and an EP of new music as part of the purchase price. The three-track Visions You Can Hear EP is officially the first 2021 album I listened to in full, which feels appropriate given how big a role Ohbliv’s work played throughout the course of last year’s listening.

Beanie order in, new EP downloaded, copy of Sprit Medicine in the mail… It’s great time to be a fan of timeless instrumental hip hop coming out of Richmond. Act fast, though; I imagine the beanies will sell fast, and being left out in the cold in this case is both figurative and literal.