Yesterday, I wrote about a few of the many reasons to see live music. There’s one example I left out because I had today’s post in mind, and in the age of the interweb, it’s an extremely rare one: music that’s exclusively available in live form. In late May, Hoax Hunters performed their first set as a band under the name the Blood Vowels. I couldn’t make this inaugural show, but this past Friday (YES, the same night as the Sharon Jones and the Dap-Kings show — Mrs. You Hear That?!? is a trouper!), which was just a few days after the name change was made Twitter-official but before any of their music had made its way online, the Richmond-based band performed their second show at Strange Matter. It was such a gift to walk into the venue completely free of preconceptions, filled with the excitement of knowing I was about to hear music that, at the time, wasn’t within Google’s beneficently creepy purview. Hoax Hunters rewarded me with six explosive and exhilarating rock songs that resonated right away, leaving an uncommonly gripping first impression. Three of the tunes from Friday’s show have been posted on the band’s ReverbNation page, including my favorite of the night, “Mantooth.” The track highlights how well-crafted their songs are, mixing power and subtlety in a way that shows real care and creativity. Check it out here, and be sure to check the band out at their next show, on August 4 at Sprout with White Laces, Fossil Eyes and Grandfather.

Sharon Jones and the Dap-Kings

There are a zillion reasons to go to a concert. Maybe your favorite band is coming to town and you can’t stand the thought of missing it, or maybe you’re curious how a group’s sample-driven electro-pop sounds live. Or maybe your friend grabbed an extra ticket because “Dude no one else wants to go and you still owe me for the time I was wingman and that girl’s friend puked couscous all over my Ed Hardy T! LEBANESE AND FERRIS WHEELS DON’T MIX BRO!!” Whether it’s about the people we go with or the music we experience once we’re there, I think concert goers are all looking for a the same thing — a connection — and good lord did I ever find one this past Friday when I saw Sharon Jones and the Dap-Kings. My friends Tex and Clay raved about her when they saw her last, and since they were out of town and couldn’t make it, I spent half the show thanking them via text for recommending her. She was dazzling. She wore a sparkling black and white dress and danced non-stop, in spite of the 90-plus-degree heat, but what stood out most wasn’t her bottomless energy or her spectacular voice, it was how she made it feel like she was singing directly to you. She pulled people on stage, sang happy birthday to a lucky fan and every once in a while, looked out and blinked her eyes flirtatiously, knocking us off our feet and drawing us closer simultaneously. She pulled us in even further by sharing the story behind each of the group’s soul songs, complete with a moral to apply to everyday life. My favorite was “Window Shopping,” which is about only having eyes for one person [insert sexy blinking here]. Preview it below, and grab their album I Learned the Hard Way here. And if you ever have the chance to see Sharon Jones and the Dap-Kings, don’t forget your dancing shoes! I’m serious — she might pull you on stage, and you’re gonna need them to keep up.

I tend to get excited about stuff. This is going to sound ridiculous, but sometimes I get so excited for an album, I can’t tell if I like it or not when I finally hear it, and Bon Iver’s eponymous sophomore album is a great example. His debut, For Emma, Forever Ago, was a critically acclaimed success story with one of the most touching origin stories in recent memory, setting the stage for a highly anticipated follow up. So when NPR posted their First Listen preview on June 9, guess who listened to the album three times, backtobacktoback? (I’ll give you a hint: it’s the same guy who spent last evening tweeting at Dale Earnhardt Jr Jr about the Detroit Pistons’ draft picks…) Right away, I could tell the album was both beautiful and complicated, but I couldn’t tell if I was enjoying the album, appreciating it or just excited to be finally hearing it. Instead of picking it apart, I tried something different. I put it down, walked away and came back a week and a half later, when the album was released. The moment I returned, I knew that I loved it. You know the few microseconds when a song first comes on, before you consciously recognize which song it is, when your brain reflexively says either “Oh, I like this!” or “Oh, I’ve heard this! It sucks!”? Every single one of the songs on Bon Iver passed the reflex test — my unconscious mind greeted each one like an old friend. If you haven’t heard the album yet, you’re in for a treat. It’s a complex web of styles, emotions and images that add up to an incredible listening experience. Check out the official video for “Calgary” above, and click here to buy the album from iTunes.

I was recently having a craptastic day, and had resigned myself to the day’s craptastic trajectory when, out of the blue, I was thrown a life preserver in the form of an email from my friend Giselle. Inside was a link to a Rolling Stone-hosted preview of Vetiver’s new album, The Errant Charm, and in just a few minutes, my world was transformed. Ever since Giselle first told me about Vetiver a few years back, I’ve admired their knack for crafting folk songs that can fill a room with their ethereal depth. But this was different. The Errant Charm didn’t just fill a void — it lifted me out of my chair and took me somewhere more fun and relaxed than where I started. Listening to the the album makes you feel like you’re striking out on a hybrid road/beach/camping trip with a few of your best friends and Andy Cabic’s soothing voice narrating the whole adventure. Several days after my fist listen, “Ride Ride Ride” and “Wonder Why” haven’t stopped making me want to hit the road Easy Rider-style, and “Can’t You Tell” is still bringing a big, summer-time smile to my face. Best of all is the emotional connection I have with The Errant Charm, because I’ll never forget how it came into my life at just the right moment, thanks to a perfectly timed email. If you want to be happier than you are at this very moment, check out “Can’t You Tell” below or click here for the Rolling Stone preview that came to my rescue, and if you enjoy it, click here to buy The Errant Charm from iTunes.

We live in a crazy world of possibilities. Want proof? There is so much music in the world that people sit around MAKING AWESOME MUSIC OUT OF OTHER PEOPLE’S AWESOME MUSIC. It’s like usury, except it won’t land you in the 7th circle of Dante’s Inferno! Yay! With sampling, remixes, mix tapes, mashups, and whatever the hell you want to call Girl Talk, there exists a wild and diverse ecosystem of used tunes that overflows with creativity, and I’m extremely pumped about what washed up at my feet today. James Drake is the work of Philly producers Bombé and Mr. Caribbean, and it mashes together the music of British composer/performer James Blake and Canadian rapper/performer Drake. That’s right friends! Drake’s Canadian! And so is Alex Trebek! Yeah, I guess everybody knows that one … how about Michael Cera? Whaaaat? I know! OK, moving on … While most producers and DJs would settle for throwing a few Drake verses over some of Blake’s electronic soul songs, James Drake provides valuable insight into what makes these two musicians tick, boiling down the two singers’ common mastery of melancholy into a potent concentrate. And let me tell ya, this is one weighty bouillabaisse. The combination acts like it has it’s own gravitational pull – anytime you hear a flash of Drake’s star power, or of Blake’s subtle sweetness, the other is there to bring the darkness back into focus. It’s a fascinating listen, slickly produced and truly fun, in spite of it’s gravity. Listen to the whole thing below or download it for free here. And if you don’t have James Blake’s self-titled album, get that shit STAT and then get your James Drake on. 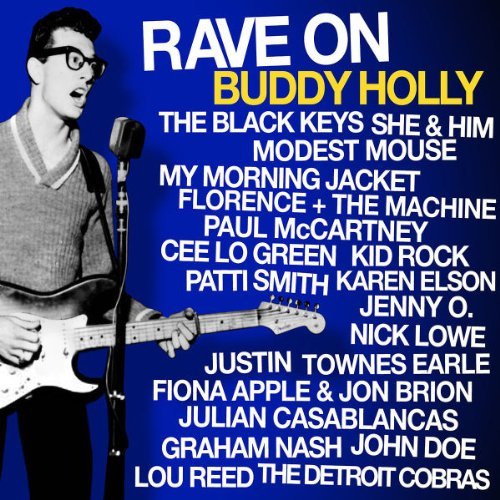 Father’s Day got me thinking about how certain music sticks out in my memory as being omnipresent throughout my childhood. My dad loved early rock & roll, and even in the darkest depths of my angsty, Jnco-wearing, Nirvana-obsessed, “NO MOM I don’t CARE if my hair’s in my eyes and I can’t see anything” middle school days, I never lost the appreciation my dad instilled in me for a few canonical artists. Among the most sacred of these was Buddy Holly, and little did I know when I wrote last week about “The Day the Music Died” that NPR was just days away from throwing us a First Listen of the new, star-studded tribute album, Rave On Buddy Holly. The list of contributors is impressive, with legends like Paul McCartney, Lou Reed, and Patti Smith among them, but what makes the track list even more remarkable is the quality of the music that Holly released in just a three-year recording career. “True Love Ways” … “That’ll Be the Day” … “Peggy Sue” … “Everyday” … “Oh Boy!” … so many of his songs have become part of the fabric of American culture, and it’s easy to see his influence all across the musical spectrum. Buddy Holly is also proof that the truest songs sound simple, as if they occurred naturally and were picked off the vine at just the right moment, and it’s a treat to hear so many accomplished musicians offer their interpretations. You can sample some of the songs from Rave On Buddy Holly below, and you can hear the rest at NPR’s First Listen up until the record is released on June 28.

Who cares if they drive on the wrong side of the road and call sweaters “jumpers” … the Brits know their music. In fact, London is home to the world’s greatest car stereo, and I’m not talking about your cousin’s ’94 LeBaron with the subs in the trunk. I’m talking about the Black Cab Sessions! These videos feature famous bands crammed into the back of London’s trademark black cabs, performing for an audience of two: a cameraman and a disoriented cab driver, who has only a few moments beforehand agreed to host the mini concert. It’s a different driver each time, but one thing doesn’t change – they’re always filmed in one take, so you get a truly unvarnished view of the performers. That’s one reason I love The Cool Kids’ Black Cab Session so much. During their 5-minute ride, you get to hear the crazy talented, Chicago-based hip-hop duo of Antoine “Sir Michael Rocks” Reed and Evan “Chuck Inglish” Ingersoll trade off rapping and drumming a beat on the side of the cab, only to have the session fall to pieces when Mickey spits what might be the greatest freestyle lyric of all time: “My imprint is worth more than 9 gold infants.” Love it. Just … love it. Check out their Session above, and poke around the Black Cab Sessions’ website, because tons of great artists have recorded one. And keep an eye out for the Cool Kids’ album When Fish Ride Bicycles, coming out July 12. To whet your appetite, I’ve arranged a bonus test drive below of “A Little Bit Cooler” from their outstanding record, The Bake Sale.