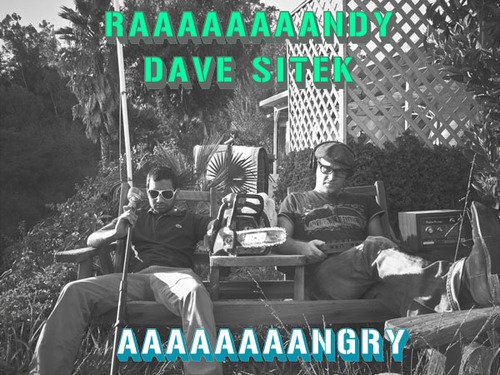 How could I dedicate a week to mixtapes without throwing in a diss track? Insult-hurling songs are a time-honored mixtape tradition, and I can think of no better artist to kick off the weekend than Raaaaaaaandy (aka “Randy with eight As”), the Soulja Boy-inspired alter ego of one of my favorite comedians, Aziz Ansari. The character first appeared in the movie Funny People, and was so beloved that Ansari did a tour in character, performing raunchy stand-up with a backing DJ. But Raaaaaaaandy has a problem. He wants to release a mixtape, but can’t because none of his collaborators will send him their verses. So he does what any reasonable fictitious comedian/rapper would do – record a monster diss track. It’s called “Aaaaaaaangry” and takes a shot at pretty much every rapper in the game, from newcomers Kid Cudi and Drake to seasoned vets like Eminem and Wu Tang. He knocks Clipse for their clothing line, Dr. Dre for his line of headphones, and asks Jay-Z, “Did Coldplay have to wait this long?” Awwwwwwww shit – with eight Ws! Give a listen to “Aaaaaaaangry,” and if you haven’t seen clips of Raaaaaaaandy’s standup, I highly recommend checking a few out (all are NotevenclosetoSFW).