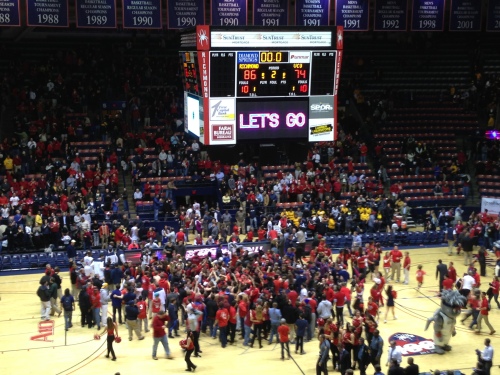 Just last night, Mrs. YHT and I had the pleasure of sitting in section 18 of the Robins Center and watching our alma mater, the University of Richmond, mount an unlikely last-minute comeback and beat #19-ranked Virginia Commonwealth University in overtime.

It was fantastic. Probably the best college basketball game I’ve ever seen in person.

That said, I had low expectations going into the game (VCU has been playing extremely well — UR, not so much), so when VCU started pulling away near the end of regulation, I wasn’t exactly shocked. What was a little jarring was how much louder the VCU fans were, despite the fact that they were the away team. It was impressive. Also embarrassing. At times, the VEE-CEE-YOU chants were so loud, the only thing that could take your mind off the ticket sales/team spirit disparity was the music pumping out of the arena’s possibly new and definitely booming PA system.

Since I failed to DVR the game and am desperate to relive it, and since the music they played in the arena during breaks wasn’t half bad, I thought I’d share with you a sampling of the songs that helped carry the Spiders to an unlikely victory.

END_OF_DOCUMENT_TOKEN_TO_BE_REPLACED 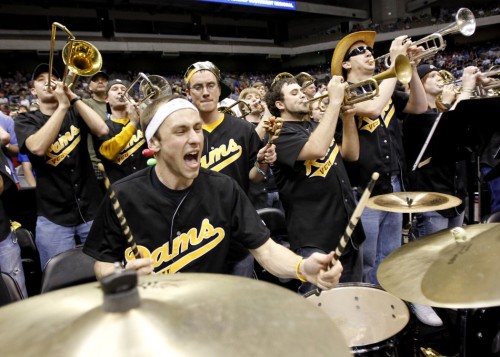 The NCAA men’s basketball tournament is underway, and twelfth-seeded VCU scored a big win over fifth-seeded Wichita State last night, upping the Rams’ two-year tourney record to 6-1. That’s just bonkers. Shaka Smart is a total badass, and VCU’s was easily the most exciting game of the day. And I say all this from the perspective of a University of Richmond grad who is currently licking his wounds from a pretty cruddy season that didn’t even come close to resulting in an NCAA tournament berth. But the Rams’ win over Wichita State has me feeling like it’s 2011 all over again. I’ll never forget how supportive the city of Richmond was of both teams last year, when UR made it to the Sweet 16 and VCU plowed ahead into the Final Four. It was so much fun to cheer for VCU after UR was knocked out, so it feels totally natural to do the same now. I watched last night’s game with a friend who’s a grad student at VCU, and once the win was secure, he had what I gather is a fairly typical reaction — he snagged the nearest AUX OUT cable, plugged it into his phone and blasted “Black and Yellow” by Wiz Khalifa (I was told to mention here that VCU’s colors are actually black and gold, but I’m pretty sure everyone’s cool overlooking this particular technicality in this particular context). While this victory anthem played and my Twitter feed started filling up with ecstatic posts (a welcome break from the jealousy-inducing SXSW tweets), I started searching on Hype Machine for a remix of the song that could keep the celebration going. As you can see, there are a zillion of them, and no one of them could truly capture the excitement in the air, so I did the only reasonable thing — I played every one I could get my hands on at the same time and recorded the ensuing din for posterity. Without further ado, I present to you, in honor of Shaka’s 6 tourney wins in just 2 years, 6 remixes of “Black and Yellow” being played simultaneously. These include [taking a deep breath] the “Morsy Bklyn Booty Mix,” the “Big Gigantic and Samples Remix,” the “Go Periscope Remix,” Xavier Pryce’s “Wack And Yellow,” a version from DJ Kue, the “Mister Gray Dubstep Edit,” and last, but certainly not least, something called the the “DJ Smerk Transition.” By making it through the whole thing, you’ll be displaying the exact same fighting spirit that has earned VCU their impressive tournament record. You may also be damaging your hearing. Listen below (I’ve also included the original to cleanse your aural palate afterwards), and best of luck to the Rams in Saturday’s game against Indiana!