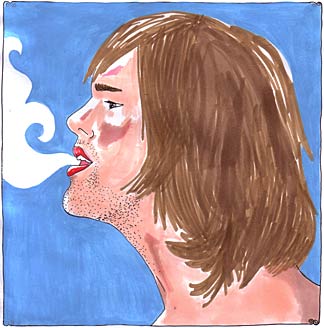 Yesterday I wrote about Daytrotter Sessions, one of my favorite resources for new music, and I linked to Jason Isbell’s outstanding episode. There’s another Daytrotter artist who is near and dear to my heart, thanks in large part to my sister’s wedding. She got hitched in the summer of 2008 at Architectural Artifacts, an eclectic antique salvage shop that fills a spacious former factory building in Chicago. My sister did much of the planning herself, and I’m not sure how she managed to book him, but David Vandervelde performed. He was awesome, and I haven’t stopped listening since. He’s recorded two Daytrotter Sessions, one on Christmas Eve of 2006 and the other in February of 2009. They’re both fantastic in totally different ways. The first is a full-band celebration, electrified and unleashed, and the second is more intimate, with Vandervelde playing acoustic guitar, accompanied only by bass and a backing percussion track. In both cases, his voice shines above all else, gracefully rising and balancing, as if weightless. Check out “Jacket” from The Moonstation House Band album below, and click here and here for his Daytrotter Sessions.