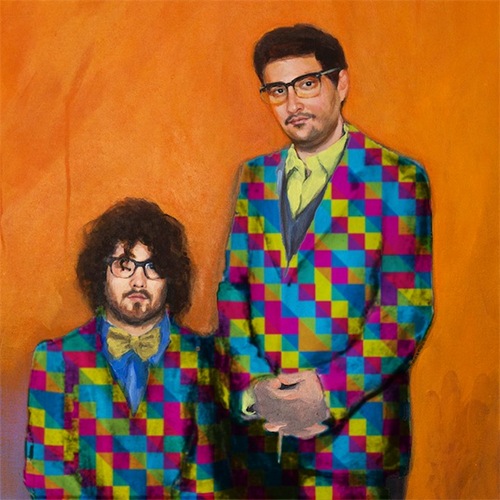 Repetitive listening … check. Telling all my friends that they should listen … check. Telling everyone a second time that they should listen … check. It’s official. I have a band crush* on Dale Earnhardt Jr Jr. It started a few months ago with their name, which is not only memorable but ballsy, in that it ignores some serious Google (or Bing, if you’re a Republican) search result drawbacks. I was drawn in even more by their marketing savvy, which is evidenced by persistent racing imagery and one of my favorite Twitter accounts in all of Twitterdom. But in the end, none of that would have mattered if their music wasn’t as special as it is. Their debut LP It’s a Corporate World rounds out my Tuesday music-buying binge, and I’ve been looking forward to sharing how great it is ever since I finished listening to the album. Theirs is a truly soulful brand of electro-pop, with an intelligence that permeates each note, sample and lyric. One of my favorite songs on the record is “Skeletons,” in large part because it highlights Dale Jr Jr’s talent for balancing mind and heart, electronic beats and acoustic guitar, enjoyment and meaning, all in one 2:20 second song. It’s a Corporate World is so much more than a fun summer album, but I’ll probably have more fun listening to it than any other album that comes out in the next few months. Join me in my band crush by listening to “Skeletons” below and downloading their album from iTunes.

*Damn you, Urban Dictionary. I thought I invented the term band crush. I was wrong.