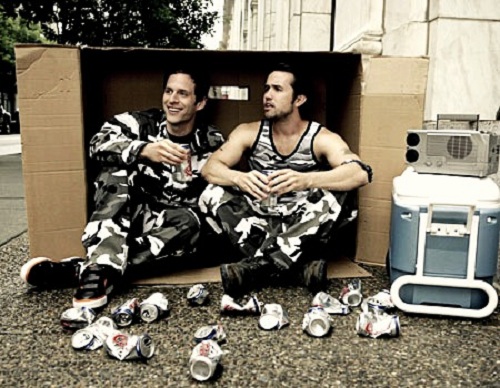 When all is said and done, and the robots turn off broadcast television so we’ll be more productive slave-laborers, It’s Always Sunny in Philadelphia will likely end up being one of my favorite shows of all (pre-robot apocalypse) time. It takes the “every single major character is reprehensible” premise that Seinfeld popularized to new and amazingly scummy lows, creating a moral vacuum that’s equal parts hilarious and cathartic. I seriously walk away from each episode thinking, “Thank god those people don’t actually exist in real life,” and by extension, “Thank god I’ll never be that horrible of a person.” There may be no better illustration of what I mean than the scene pictured above — Mac and Dennis dressed in camo, drinking Coors Light in a cardboard box in the middle of a city sidewalk, hunting a homeless man named Cricket. It’s so messed up that it’s absurd… but it’s also really, really funny. And I have no way of proving this, but I have a sneaking suspicion Brooklyn-based band Chairlift saw this episode and took notes, because they’ve damn near written its score. “Sidewalk Safari” paints an unreal picture of exacting vengeance on a pedestrian, starting with the line “All of the bones in your body are in way too many pieces for me. Time to do something about it, if you know what I mean.” It’s totally creepy but extremely well-acted by lead singer Caroline Polachek, and I can’t stop listening to it. I don’t know if I love it so much because of the Always Sunny episode, or because its absurdity provides a similar catharsis, but I applaud Chairlift for making a catchy song that has you bobbing your head while Polachek sings about running someone down with a car, and I dare you not to let a wry smile slip when you check it out below. If you dig “Sidewalk Safari,” you can click here to pre-order their upcoming album Something, which will be released on January 24.

Leave a Reply to You Hear That?!? Cancel reply