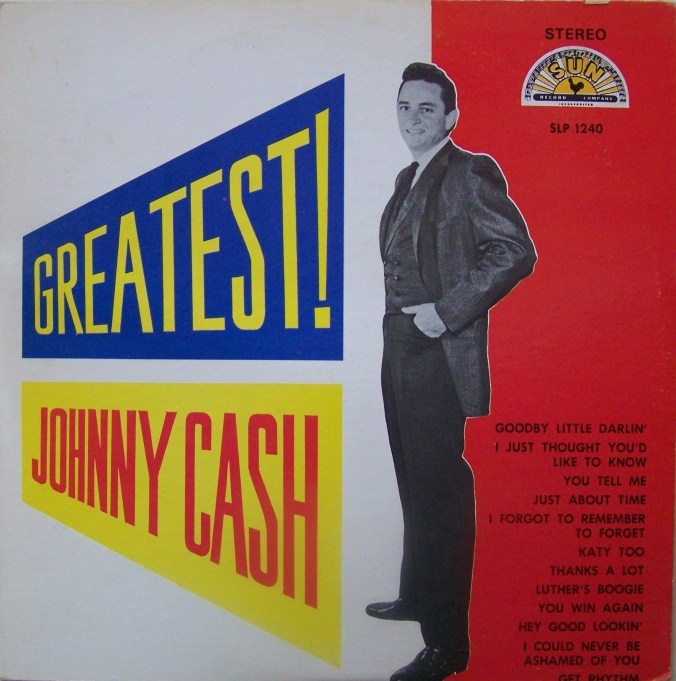 Do you believe in signs? Not, like, stop signs, or that neon beer sign your college roommate had all four years but tried to pawn off on you after graduation because his girlfriend said it didn’t fit into the decorating scheme she’d devised for their first shared apartment. No, I’m talking about those fate-leaving-you-breadcrumbs-on-the-way-to-some-poignant-eventuality-type signs. I used to, but I can’t say that I do anymore. At least not wholeheartedly. I do love Fools Rush In, though. Wholeheartedly.

All the same, if something tickles the front of your consciousness long enough, you’re gonna scratch that sucker, and that’s exactly how the album pictured above ended up on my turntable last night. The acute itch started with a bandmate wearing a Sun Records t-shirt on Saturday night, and continued just a few hours later when Mrs. YHT and I were having a late-night snack at Gibson’s Grill and saw an incredibly sexy, vintage/diner-style Sun Records clock hanging on the wall nearest to the restaurant’s street-level bar. But in truth, the itching started long before that.

My dad grew up in Memphis, TN, and ever since I can remember, even before I knew what it stood for, I knew to respect the Sun Records logo. Elvis. Roy Orbison. Carl Perkins. Jerry Lee Lewis. For as much as I heard these gents when I was growing up, they might as well have been extended family members. My enjoyment of and admiration for Johnny Cash came much later, though — sometime around the end of college, I believe — despite the fact that he released 18 studio albums on Sun Records. And as much as I’ve grown to love his music (he’s certainly eclipsed those other Sun artists, in terms of my own listening habits), I’ve resisted buying his stuff on vinyl. His is one of those monstrous catalogs, with dozens of LP’s, singles, re-issues, covers albums, best-of albums, gospel albums, Christmas albums, live albums… it’s hard to know where to start.

But the dam has finally broken, and I place the blame squarely on my bandmate’s shirt and the aforementioned, sexy-ass clock. On Sunday afternoon, at the new Plan 9, with these coincidentally conspicuous pieces of memorabilia fresh in my mind, I came across a copy of Greatest!, an album Cash released on Sun in 1959. It’s a really neat collection of songs, with a trio of Hank Williams covers, a Roy Orbison tune and 4 Man-in-Black originals, including a favorite of mine, “Get Rhythm.” For all his darkness — the black clothes, his problems with addiction, this picture — Cash wrote one of the all-time odes to optimism in “Get Rhythm.” I hope you’ll join me in kicking off the weekend with a healthy and much-needed dose of hope by listening to it below.