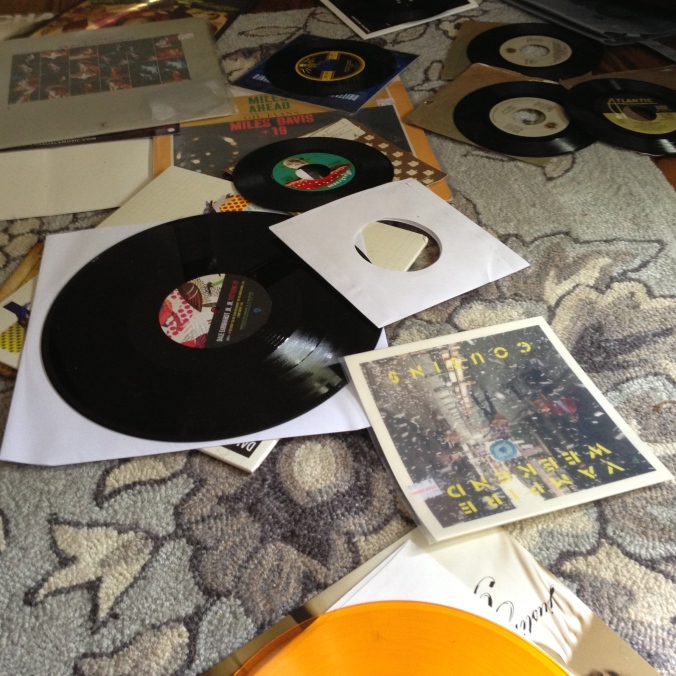 This past Sunday, while a stream of soft, late-morning light was tumbling through the living room window I’d left open overnight, I awoke on the couch, sat up (sort of) and snapped the above photograph. It is as much an illustration of how not to treat your records as it is a testament to how much fun the previous day — Record Store Day — had been.

I’d planned on writing a preview post on Friday but got distracted by and thoroughly wrapped up in Boston manhunt coverage, deciding ultimately that a blog post about which limited-run records I was hoping to get my hands on would seem incredibly trivial next to the day’s headlines. Instead, with Dzhokar Tsarnaev safely in custody and that boat somehow — miraculously, I think — not in a million pieces, I’d like to roll out my Record Store Day highlights through a series of open letters. I’m not sure how many there will be, but I do know where I want to start: with the kind folks who joined Bandmate 4eva Doug and me in lining up outside BK Music early Saturday morning. 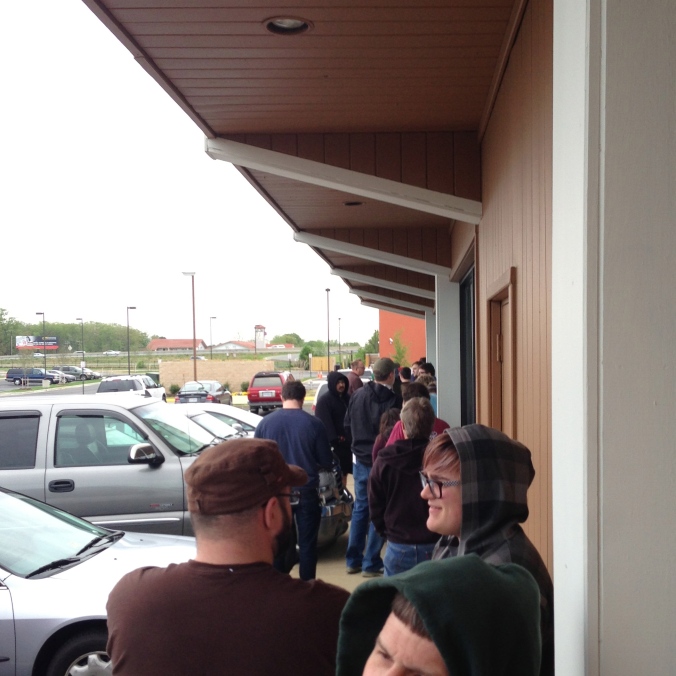 Hey guys. And gals. But mostly guys. (My Sheetz breakfast sandwich wasn’t the only sausage in that line, if you catch my drift.) You may or may not remember me from Saturday — camo hat, striped shirt — but I want to start by sincerely congratulating the 30 or 40 intrepid souls who were already there when I got in line around 7:45 a.m. Being both an iPhone obsessive and a devoted supporter of RSD, I’m no stranger to waking up before dawn and waiting outside a store that’s about to start selling something you really, really want. I know the sacrifices you made. Sleep. Warmth. The dignity of being hungover in your own home. In the brutal battle against the two-headed monster of supply and demand, you are true warriors, and I salute your resolve.

I also salute your kindness. When Doug and I rolled up to BK, he volunteered to go get breakfast while I saved him a spot. Well, the number of people waiting doubled in that span of time, and because of my crippling fear of confrontation, I spent those minutes mentally rehearsing different scenarios for Doug’s return, most of which started with someone in the back of the line yelling “HEY!” and ended with acts of physical violence. But did you make a big deal when my breakfast-bearing friend returned? Nope. No action whatsoever from the back section. That’s understanding. That’s trust. Given the market forces at work, it was a true gift, almost unbelievable in its generosity.

You were just as generous with conversation. Not directly, mind you. God no. While I was waiting for Doug to get back, I was in lock-down introversion mode — the same mentality I adopt to survive airplanes, bathrooms and elevators. Nevertheless, I overheard fascinating exchanges about everything from the health problems you experience as a 50-year-old male to the other health problems you experience as a 50-year-old male, and as a result, I’ll be much more likely to correctly self-diagnose the next time I notice blood in my urine. Unlike the intentionally commoditized records waiting inside, you can’t put a price on that type of knowledge. 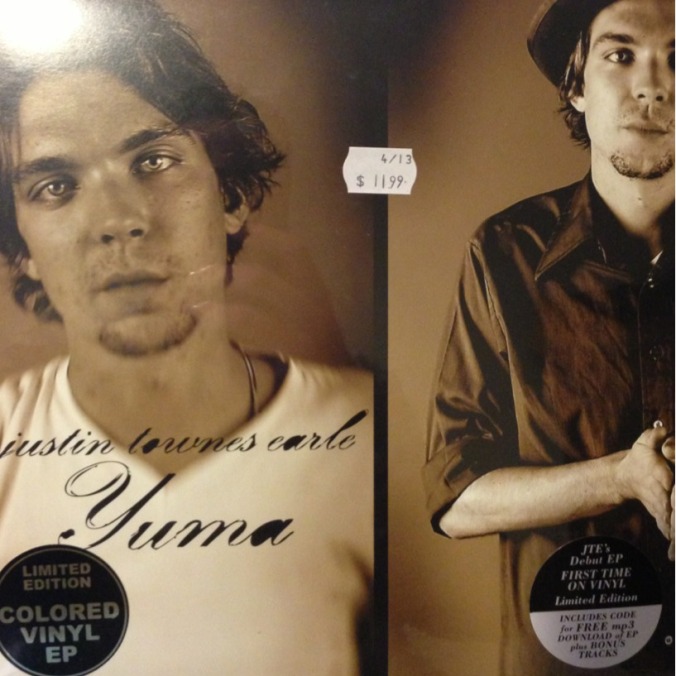 But more than anything else, I want to thank you kind people for saving me a copy of Justin Townes Earle’s Yuma. You could sense my hopeful anxiety, couldn’t you? My nervousness at the fact that it was the first time the album had ever been pressed to vinyl, and that only 1000 copies were made? My fear that, because other Richmond stores had less luck ordering the 10-inch opaque-gold disc, anyone for whom Yuma was a priority would be standing somewhere in that very same line? The closer it got to 9 a.m., the worse the odds seemed… but I need not have been afraid. When those doors opened, and we all flooded in as one stormy sea of anticipation and commerce, you parted just long enough for me to catch a glimpse of the sepia-toned cover I coveted, and a few frantic seconds later, my Record Store Day dream had come true.

Had you not shown me the way and saved me a copy, the rest of my Saturday would have been different, to say the least. I would have followed the wave of store openings — Plan 9 at 10 a.m., Steady Sounds at 11, Deep Groove after the dust cleared — drifting from one shore of disappointment to the next, knowing deep down the sadness with which I’d leave, but unable to stop myself from checking to make sure a stray copy of Yuma hadn’t washed up. It would have been no fun for me and even less fun for Doug, who would have had to listen to me whine all morning about the jerks who only bought it so they could turn a profit on ebay.

But that was not my fate. No on that day. You, Doug and the good people of BK Music shepherded me to Record Store Day glory, and for that, you have my unending gratitude. I hope you were just as successful, and I hope to see each and every one of you outside BK, dark and early, on Black Friday morning. Until then, I invite you to revel in the bitter beauty that is the title track from my new favorite record.