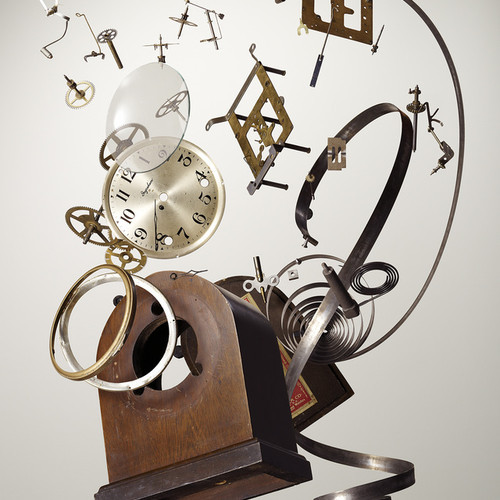 I’ve been listening to Olivier Messiaen’s Quatuor pour la fin du temps (“Quartet for the End of Time”) quite a bit lately. I stumbled across a copy at Goodwill — the version with a shattered swastika on the cover. Remembering that Radiohead guitarist Jonny Greenwood has cited Messiaen as a major influence, and that Greenwood’s brilliant application of the ever-spooky ondes Marteno owes a great deal to Messiaen, I decided having the record was worth the dollar I’d pay for it and the intense awkwardness I’d experience when handing the cashier something with a large swastika on it. (That same discomfort is why I didn’t include that version’s cover at the top of this post. I love vinyl album art, but it’s a little hard to stomach.)

A little background on the piece: Messiaen was a soldier during World War 2, and in 1940, he was captured by the German army and placed in a POW camp located in what is now Poland. Detained in the same camp were a violinist, a cellist and a clarinetist, and Messiaen set about to write (“finish writing” might be more accurate — I read that some sections were built on existing compositions) a piece suited to the players who were imprisoned with him. A sympathetic guard provided a pencil and paper for composing, and the authorities eventually furnished his quartet (Messiaen on piano) with the instruments they needed to premiere the piece in January of 1941. It’s weighty, as you might imagine, drawing on themes related to the book of Revelation — pillars of fire, heaven, eternity — but there are these wonderful contrasting moments of levity. Whole movements are inspired by bird songs (Messiaen was big into ornithology), making for wonderful light/dark clashes. Thunder and lightning, hand-in-hand. Powerful stuff, especially when you consider the conditions in which it was composed.

I listened to “Quartet for the End of Time” again this morning, looking for something that could measure up to the weight my heart was and still is feeling.

I can’t say I was surprised to learn that the cop who killed Michael Brown would walk, but it’s still profoundly depressing. I wasn’t listening to Messiaen’s piece to appropriate sadness that isn’t mine, nor did I think there was a direct link between Messiaen’s experience and Brown’s. You have to step back pretty far to make a connection. Nevertheless, that’s exactly what I found myself doing — thinking broadly about humanity’s continued capacity for inflicting suffering and injustice.

There’s a staggering amount of evil out there. Big ticket evil like what we’re seeing in Ferguson, small ticket evil like giving a crappy tip to a busy waitress. But if you zoom out far enough, just as the curve of the Earth comes into view once you get far enough from its surface, Martin Luther King Jr.’s “arc of the moral universe” comes into view — the one he was talking about when he said that “The arc of the moral universe is long, but it bends towards justice.” President Obama likes to use that quote, and I like when he does. Maybe Michael Brown’s death isn’t the event that fixes our broken and discriminatory criminal justice system, and Darren Wilson may spend the rest of his days as a free man. But there’s still a chance — as remote as it may seem now — that, despite the grand jury’s decision, our collective understanding of this problem moved forward along that arc in the last 100 days. That enough people started thinking of solutions that some good can still come out of this.

It’s easy for me to think in these detached terms. I don’t live in Ferguson, and I’m not black. And there’s nothing revelatory about that last paragraph. It’s warm and fuzzy and vague, I know. But I also know that one of the guards at Messiaen’s POW camp gave him a pencil and paper. That’s not vague. That’s the kind of direct benevolence that transcends time and circumstance, making room for hope where it’s most desperately needed. Maybe listening to Messiaen will make you feel hopeful. It worked on me.