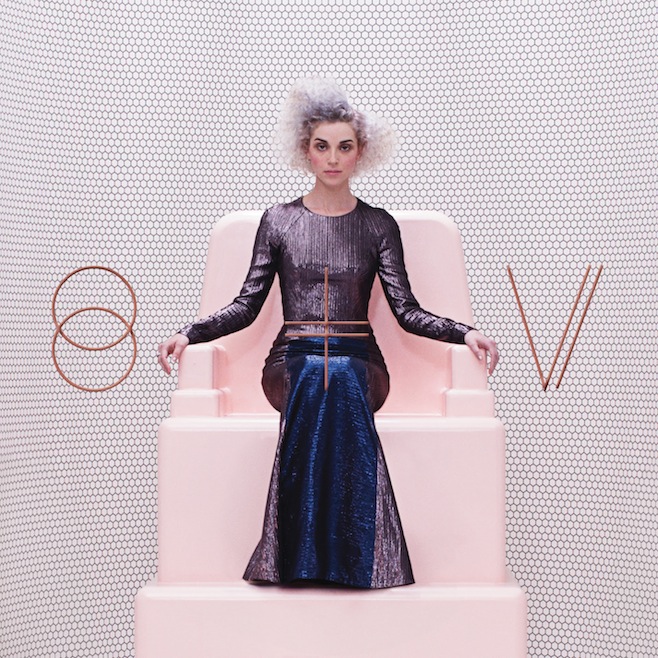 I’m still floating back down to Earth after last Wednesday’s St. Vincent show, so if you’re allergic to hyperbole, you should proceed with caution. There are so many glowing things to say about her performance — a few adjectives that come to mind right away: otherworldly, innovative, exacting, singular — but the takeaway I can’t stop thinking about involves something that didn’t actually happen on stage. (And I’m not talking about sardine-like crowd experience, which was like some crazy test of how little personal space you can command before totally freaking out.)

During the show, this image kept popping into my head — Annie Clark standing on the same stage singing the same songs with the same vocal precision and just an acoustic guitar as accompaniment. It wasn’t because I wished she was performing that way, it was because I kept thinking about how removed her show was from that basic form of musical communication.

Quick digression: I’d always taken that form — voice and acoustic guitar — for granted, because so many of the artists/groups I enjoy go that well-worn route. It was a fairly recent comment from Father John Misty (I can’t remember if it was onstage or in an interview) about how he can imagine people rolling their eyes at another white dude with an acoustic guitar that made me take a step back and think about what deciding to perform that way means.

So what does the way Annie Clark decided to perform on Wednesday mean? In short, I think it means that she’s a visionary who cares deeply about the experience her fans have at her shows.

Layer upon layer of artistic value was stacked on top of the basic structure of each song. Some you probably know about already, since the tour in support of her self-titled album has been going on for a while. The most visible is Annie-B Parson’s choreography — folding and unfolding arms, quick longitudinal and latitudinal steps that created a conveyor belt effect, synchronized movements with Toko Yasuda. I knew it was coming, but I couldn’t have guessed how much I’d get out of seeing it in person. The choreography wasn’t just impressive — it elevated the whole experience, like you were being treated to a second show for free. One that was both related to and independent of the songs you were hearing. The closest analogue I can come up with is the layer of ridiculous promotions that accompanies Richmond Flying Squirrels games. There are so many silly mascots, giveaways, cross-promotions and fireworks that you’d earn your money’s worth without seeing a single pitch. The difference is that St. Vincent is reaching for something much higher — a new art that elevates two forms by balancing them just right. Something sublime that requires painstaking preparation and talents only a tiny percentage of people are blessed with.

Clark’s voice is one of those exceptional talents. Her guitar playing is another, and it’ll be especially hard to stay away from hyperbole when talking about it. One of the first things I said to Mrs. YHT when we started walking to our car (right after I snagged a vinyl copy of St. Vincent) was that the way she uses her guitar is unlike anything I’ve seen. There are a few going narratives when it comes to Clark’s guitar, the most objectionable having to do with her gender, the most dominant having to do with her restraint — the notion that she’s more virtuosic than she shows. That seems true — what she plays is certainly selective and compartmentalized — but I think you have to zoom out a bit to get to the heart of why her playing is I-feel-lucky-getting-to-tell-people-I-was-standing-in-the-same-room-as-her type stuff.

Quick digression #2: I started playing guitar in middle school, and Jonny Greenwood is among the guitar gods I’ve worshiped in the time since. But some years back, Greenwood ruined the entire notion of guitar gods for me by responding to a question about his affinity for the instrument — again, can’t find or remember where — by saying something about how the guitar is great because of how convenient it is to pick up and play. In that simple response, he made the guitar sound more like a tool than an end unto itself. This blew my mind.

I’d guess Clark sees the instrument similarly and uses it accordingly. It’s not like she climbed the mountain and then climbed back down a bit because the likes the air a little thicker. The guitar isn’t the mountain — it’s a piece of gear that helps you climb. Her decision to hand over control of her effects pedals has this utilitarian outlook all over it. Here’s how she described that process in a recent Guitar World interview:

…my entire show is programmed, in terms of effects. I program my pedal board, and my keyboard player uses Ableton to send cues to switch programs, so I don’t have to look down at my pedal board.

I thought the remote triggering thing would bother me, but it didn’t. The overall experience was so much bigger because of it. Mrs. YHT and I were standing toward the back of the floor section, and for a short time, I had a clear view of the controls on the lighting board. The hands of the woman working the lights were in constant motion — it was another performance within the performance — and it’s fun thinking back on the guitar effects in those same terms, like sights and sounds were coming from here, there and everywhere. Like the whole venue was involved. Maybe that’s romanticizing things, but whatever. It was really, really cool. (Clark even handed her guitar to the front few rows during one especially noisy, distorted section of “Your Lips Are Red.”)

Other fun layers: Lots of sub-bass, which turned the floor and our bodies into one giant woofer. Toko Yasuda doing a little bit of everything, from keys to complementary mid-riff choreography (not to be confused with midriff choreography). Clark’s episodic banter, which sprinkled Richmond references into dreamy narratives. A “Fitter Happier“-style robot voice kicking off the show by asking the audience to refrain from “digitally capturing” the performance, which kept screen distractions to a minimum. A gurney was involved. There was also a giant, cube-shaped stage-within-a-stage that let Clark tower over the crowd for a few songs. It probably ranks as the most elaborate display I’ve seen at the National, but what’s so remarkable is how focused it was. This wasn’t artifice concocted to compensate for or distract from something bad — this was a coherent and wildly imaginative artistic vision coming to life. Care was put into every aspect of the show, and I feel so lucky to have been there. I’d watch her sing and play acoustic guitar anytime, anywhere (this Take Away Show version of “Paris Is Burning” made me a fan for life), but I don’t expect I’ll see a bigger, more thoughtful show than last Wednesday’s, anytime or anywhere.