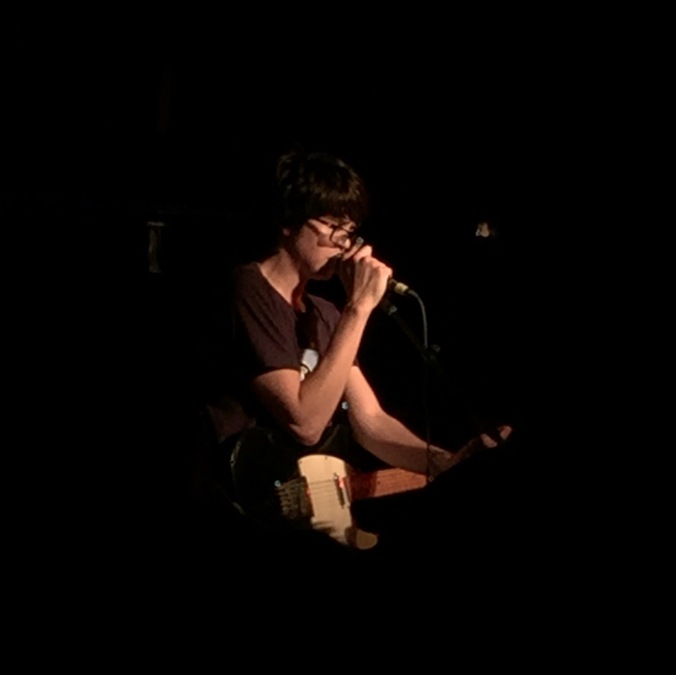 That’s one of several crappy iPhone photos I took at the Car Seat Headrest show in D.C. last week.

It’s a borderline miracle that I was there. Deciding to go was a last minute thing — I saw they were playing at the Black Cat that morning, and I’d only been listening to his/their stuff for maybe 48 hours. Plus I’d sworn off weeknight shows in D.C. and Charlottesville. I can’t tell you how many times I’ve told people (with a not-entirely-subconscious “Look how adult I am” tone) that I just can’t make those trips anymore. It’s too hard. I get so tired the next day, and my completist instincts make me want to swear things off entirely to protect myself from the pain of missing out on individual parts of that thing, if that makes any sense.

And here’s the kicker: I was getting sick. I sorta-kinda knew it at the time but was playing the denial game, and I ended up with a fever the next night. But Mrs. YHT was hosting book club that night, so I was going to be out of the house either way, and I just… I had to do it.

Going under masochistic circumstances turned out to be fitting. A few days after the show, I read an interview with Pitchfork that Will Toledo did and saw an applicable quote:

For a long time, concerts were not really my bag, because I thought it was a needlessly painful experience—between the noise of the music and having to just stand there for hours, there wasn’t a lot of enjoyment for me. But I saw Swans a year ago in Seattle, and it really blew me away. I had heard a lot of cautionary bullshit about how loud they are and how it’s the most damaging concert you’ll ever see, so I was a little concerned. But for some reason, the fact that Swans were supposed to be kind of painful actually made it more enjoyable for me.

And man was CSH loud. My friend Coyle and I were standing just a dozen or so feet away from the stage right speakers — a few rows of people behind Bob Boilen, incidentally — and I felt that rush of “Is this safe? Am I in danger?” that instinctively accompanies sensory extremes. It’s been ages since I felt that at a show. (Thanks to my pasty skin, I feel that way every time I go to the beach, but that’s a different conversation.)

But volume wasn’t the whole story. Far from it. The band was excellent, in part because “loud” is only one of the gears they can choose. There were so many changes of pace — quick left turns where distortion abruptly gave way to quiet (and the other way around), nimble lead guitar that was clear as day in spots and blissfully muddy in others, a generous emotional range, from funny to sardonic to downright angry… Toledo is a gifted, restless writer, and the group he’s put together definitely takes advantage of that.

That said, there is a constant, and it’s Toledo. His voice, especially. He conveys a deadpan manner both between songs and during them, and that matter-of-fact tone makes the language in his lyrics absolutely dance in relief. I won’t be the first or last to make this comparison, but the way Toledo emphasizes certain words via long, extended vibrato-less notes reminded me of Bob Dylan, and I ended up thinking a lot about Dylan during the band’s set. Kurt Cobain, too (probably because of the quiet-loud transitions, which Nirvana did so well). Looking back, I’m struck by how Toledo’s words and delivery represent both achievement and promise: The present seems even more impressive because of how bright the future looks for him.

Saying so might make me sound older than I am, but the truth is that I was thinking about my age almost constantly at the show. It wasn’t the crowd — there was a healthy age distribution — it was everything else. It was the fact that I knew I was getting sick but was pretending I wasn’t. It was the fact that I’d told so many people that I don’t go to D.C. shows on weeknights anymore… yet there I was. And I was there listening to guitars that were louder than I’d heard in a long time.

I think a lot about a study I saw (can’t find it at the moment) that showed how people’s taste in music calcifies between 30 and 40. I tend not to worry about that, because I love learning about new bands almost as much as I love listening to the music I already know I love — and I’m fine knowing that the brilliant new musicians I’ll be learning about in the future will, for the most part, be younger than me — but it’s weird to think that the people at the shows I go to will keep getting younger by comparison. Even though the difference wasn’t especially pronounced at the Black Cat, that idea really started to sink in, and I can’t figure out whether that bothers me or not. I’d like to think it won’t, but I’m not sure. Hopefully asking and answering the question now will help in the long run.

A few days after the show, I saw that Car Seat Headrest will be playing in Richmond in September. I’m glad I didn’t know that at the time, because I’m really glad I went to this one. It didn’t make me feel spontaneous, like I thought it might. I guess I ended up feeling like myself, which isn’t a thing that should be taken for granted. In fact, I’d go a step further and say that’s one of art’s highest callings — helping people inch closer to who they really are.