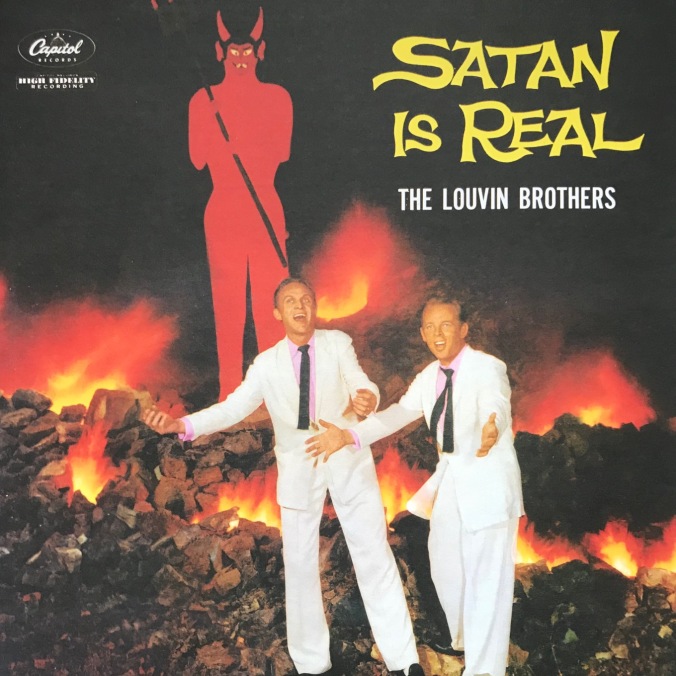 The Wisconsin wing of my family visited Richmond over the weekend, and — calendars be damned — we did a full-on simulated Christmas morning. Vince Guaraldi. Bacon. Bloody Marys. Presents. Snow on the ground. The whole deal. And as we all know, nothing says Christmas like unwrapping an album called Satan Is Real. I’d been on the lookout for a copy since I listened to the incredible Cocaine and Rhinestones episode about the Louvin Brothers. Turns out these Wonderful Wisconsinites™ had gotten me the coveted translucent red Light in the Attic pressing. You can really feel the hellfire when you hold it. A passage from the liner notes on the back:

The fiery setting pictured on the cover of this album was conceived and built by the Louvin Brothers themselves, using chiefly rocks, scrap rubber, and lots of imagination. The scene became a little too realistic, though, when Ira and Charlie were very nearly burned while actually directing the photography for this dramatic cover photo.

I can’t even. I love it so much. The (very bonkers) title track is embedded below. Take a listen:

One thought on “The Louvin Brothers”