I was delighted to learn some folks give Dave Brubeck’s Time Out album a celebratory spin on May 4th — a nod to the unconventional 5/4 time signature of “Take Five.” Count me in (no pun intended).

Don’t worry, I plan to put on John Williams’ original Star Wars soundtrack as well. Feels like the day is big enough for both, right? And if I had to guess, the Venn diagram representing Star Wars fans and music theory nerds would have a some awesome overlap. 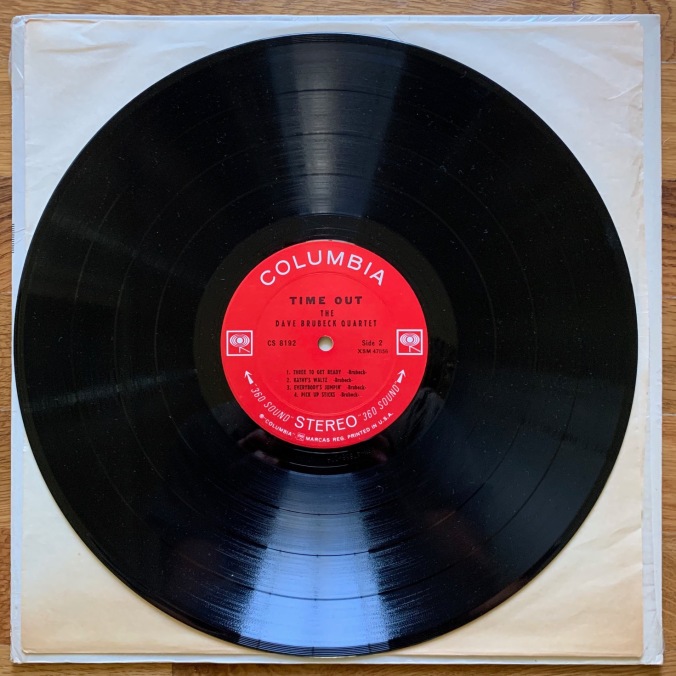 In any case, I can’t resist the opportunity to show off my weirdo copy of Time Out. My dad had more than one copy, and it wasn’t the only Brubeck album for which that was the case. Dude was a huge Brubeck fan. Then again, he had like three copies of the West Side Story soundtrack, and at least two of the South Pacific cast recording. No idea why. Forgetfulness? Unbridled enthusiasm? I keep a record spreadsheet for this very reason, but I still managed to pick up a second copy of M. Ward’s Post-War accidentally at one point, so this apple clearly didn’t roll too far from the tree.

This isn’t your average copy of Time Out, though. Side 2 is normal, but side 1 has the sticker that Columbia Records printed for Tony Bennett’s The Movie Song Album. The audio is fine; drop the needle on side 1 and you hear “Blue Rondo à la Turk,” just as you should. Yet it’s Tony Bennett’s name spinning in the center.

What makes things weirder is that a split Brubeck/Bennett LP does exist. It’s a live album called The White House Sessions, Live 1962, recorded at “an end-of-summer event thrown by the John F. Kennedy White House for college students who’d been working as interns in the nation’s capital,” according to the Amazon description. And that was released by Columbia… but not until 2013.

Anyone else out there have a copy of Time Out like this? If so, I’d love to know. In the meantime, I’ll be over here celebrating my brand new holiday. Maybe I’ll even watch a Star War.