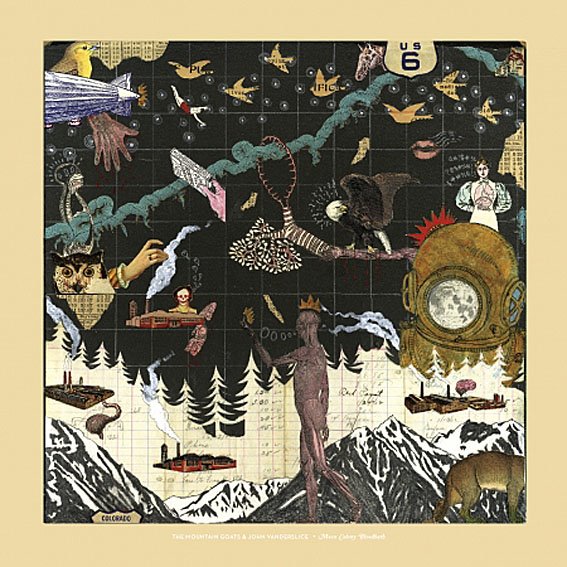 So The Mountain Goats visited The National on Wednesday evening. Sadly, I couldn’t make it out, though I did see some fantastic photos on PJ Sykes’ blog, and it looks to have been a great time. But before the show on Wednesday, as excited, anticipation-fueled tweets started showing up in my Twitter feed, I was having less than a great time. Actually, I was miserable. But not because I couldn’t go.

Reading those tweets got me thinking about a Mountain Goats song I’ve listened to a few dozen times times and absolutely love and wanted to listen to as soon as humanly possible… only there was a problem. For the life of me, I COULD NOT REMEMBER WHAT IT WAS CALLED. Nor could I remember its lyrics. I couldn’t even think of a melody! All I had to go on was a faint mental picture that involved 4 things…

That’s it. And it certainly didn’t help that John Darnielle has written a zillion songs, among them “Snow Owl,” “Snow Song,” “In The Craters Of The Moon,” “Moon Over Goldsboro,” “Earth Air Water Trees,” and “The House That Dripped Blood.”

Has this ever happened to you? Please tell my I’m not the only one. Not being able to find it was driving me bat. shit. crazy. While I frantically googled possible lyrics and scoured song title lists, it seemed so wild that I could have this image in my mind — a picture that was formed at one point by lyrics — but was completely unable to recall even a few words in a row. In my mind, this is a testament to: A. My horrible memory, B: The fascinating way music interacts with the primitive parts of our brains, and C: Darnielle’s natural talent for painting uncanny pictures, the totality of which resonates even more deeply than the components used to create them. Look at All Hail West Texas. It’s a songwriting masterpiece, offering a one-of-a-kind, immensely colorful, impressionistic portrait of a particular place and time — a creative accomplishment made all the more impressive when you consider the simplicity of the tools used to record it: a guitar and his legendary lo-fi sidekick, a Panasonic RX-FT500 boombox.

OK, so I have to admit the end of this story is terribly anticlimactic. I wish I could say that I conjured the correct song title in a dream, or that it magically appeared in my Alpha-Bits, or that I hiked up a faraway mountain to ask a centenarian monk for the answer, but no. I eventually realized a live version the song was in my cloudified iTunes library, meaning the thing was sitting on my phone the entire time. It’s called “Surrounded,” and the studio version can be found on a small-run split 12-inch record Darnielle released with John Vanderslice in 2009, called Moon Colony Bloodbath. “Surrounded” is a beautiful tune, by far the greatest tale of a remote, snowbound, Colorado cabin designed to house participants in a governmentally operated, moon-colony-based organ-harvesting program ever set to music, and I’m so happy we’ve been reunited.

Check it out below, along with the lead single from The Mountain Goats’ new album Transcendental Youth, which features horn arrangements by RVA-based dynamo Matthew E. White. And if anyone reading this finds a way to get their hands on a copy of Moon Colony Bloodbath, please let me know. Pretty please. With nice, crunchy Sugar in the Raw on top.