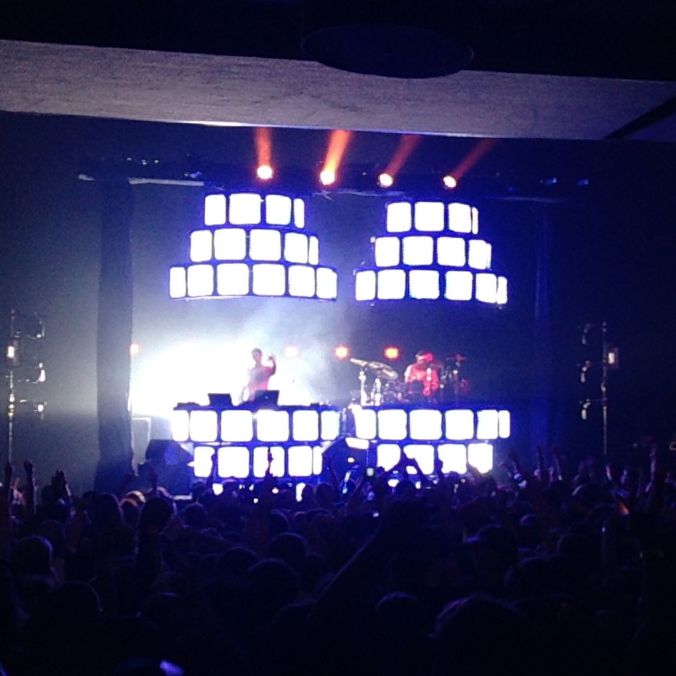 When I’m at a show, as I was on Saturday night, and I’m inspired to write about the experience, as I also was on Saturday night, I’ll often jot down ideas and observations using the skeuomorphically-styled iPhone Notes application. (I flirted with the Evernote mobile app a few months ago, but it never felt right. Something about fake legal paper mixed with that atrocious default font keeps me coming back.) These missives are usually short and few in number, mainly because I hate being the guy at the concert with his phone out while a song is going on. But Saturday’s show proved to be quite the noteworthy exception.

279. That’s how many words I typed, dodging autocorrect at every turn, in an effort to capture the excited thoughts that were going through my head as I watched Big Gigantic whip The National into a frenzy. There was just so much for one person’s senses to process. There was the visual feast of a stage setup, which featured two enormous, LED-lit pulpits flashing carefully synchronized visualizations. There was the auditory element, which offered a series of frenetic peaks and breath-catching valleys, grinding beats with expertly layered rhythmic elements, and gravity-defying sax solos amid crowd-pleasing rap samples, including excerpts from personal favorites “Notorious Thugs” and “Get Em High.” But most remarkable of all is the way Dominic Lalli and Jeremy Salken played to my sense of touch.

After a short time in the floor section, I set up shop on one of the raised platforms at the back of the venue. And as I stood there, taking it all in, I was amazed at how many parts of my body were shaking with the deeply resonant, sub-bass frequencies. My feet vibrated with the beat. My arm vibrated even more, thanks to the person in front of me drumming along with Jeremy Salken on the railing I was leaning against. My chest shook in that way you find only at concerts, except it did so with such force that it felt like I was breathing underwater. (This may be too much information, but I’ve been getting over a cold, and I’m not kidding when I say that I think Big Gigantic shortened my recovery time by shaking loose the grossness that had built up in my respiratory system.) All in all, it was as sensory-intense a show as I’ve experienced, and if I wasn’t enjoying myself so much, I might have filled up my phone’s entire hard drive with enthusiastic observations.

And word count wasn’t the only way Saturday’s note-taking frenzy broke from the norm. I needed not fear being “that guy” on my cell phone, as the room was alight with glow sticks, dotted by inflatable saxophones, and populated by people so absorbed in music that they couldn’t have cared less about iPhone etiquette.

You know how everyone dances at a wedding? Even the toddler who just learned how to walk and the grandparent who can barely walk and probably shouldn’t be dancing at all? There may not have been any toddlers or octogenarians at The National (that I saw), but this is the vibe that Big Gigantic inspires. The entire crowd was moving and raptly paying attention and waiting for their cue to raise their hands in anticipation of a climactic beat drop, dutifully signing off on these moments by invisibly high-five-ing the downbeats. The level of participation was a sight to behold, and it gave credence to something Dominic Lalli said in between songs toward the end of their set — a benediction that sums up my feelings about the value of this type of overstimulating concert experience perfectly:

“It’s all about us doing this shit together.”

Listen below to “The Uprising” — the first track off Big Gigantic’s most recent album, Nocturnal — and click here to find out if they’re coming to a town near you.