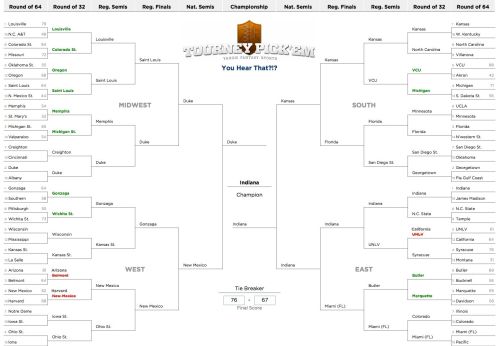 It’s all fun and games until the bracket you spent so much time on — applying your own secret predictive methodology, looking up key statistics, googling mascots to see which ones look the meanest — starts falling apart, piece by piece, poor decision by poor decision, transforming your pristine prognosticative masterpiece into a post-apocalyptic hellscape of red strike-throughs, unexpected outcomes and dashed hopes.

Things were looking pretty good for the You Hear That?!? bracket (pictured above) after today’s first wave of games. Really good, actually — I nailed every single afternoon matchup, including a pair of upsets, and I was riding that counterfeit high that comes with feeling like you’ve cracked the code and have somehow, against all odds, found a way to predict the future. Then the evening games started. Belmont failed to upend Arizona. Cal earned a hard-found win against fifth-seeded UNLV. And in the biggest shocker of the tournament’s first day, Harvard took down third-seeded New Mexico, who I had making it to the Final Four.

How could I have overlooked Harvard? Has Jeremy Lin taught me nothing? It stung even more when I realized that, while the smart kids from Boston were taking down the Lobos, I was unknowingly wearing the homemade Lin jersey I made out of an undershirt in a fit of Linsanity last year. (I know it sounds ridiculous, but the fact that I scribbled Sharpie on an undershirt in lieu of buying an actual, $100 Knicks jersey represents levels of foresight and financial maturity beyond what I’m normally capable of.) Besides, why was I so bullish on New Mexico? I didn’t watch a single one of their games this year, I knew precisely zero about their players — I didn’t even know what conference they played in. And what the hell is a Lobo? [googles “lobo”] An extinct wolf? Ugh, whatever.

Luckily, I know of a great song for soaking up these types of feelings, and I’m sharing it with you in hopes that it’ll help you through your own facepalm-worthy, bracket-busting moments. It’s called “Fuck Was I,” by Jenny Owen Youngs, and while the verses traffic in a totally different type of regret, the chorus may as well be the unofficial anthem of unsuccessful sports gambling. Hope you enjoy, and best of luck in all the bracket pools you’re competing in.