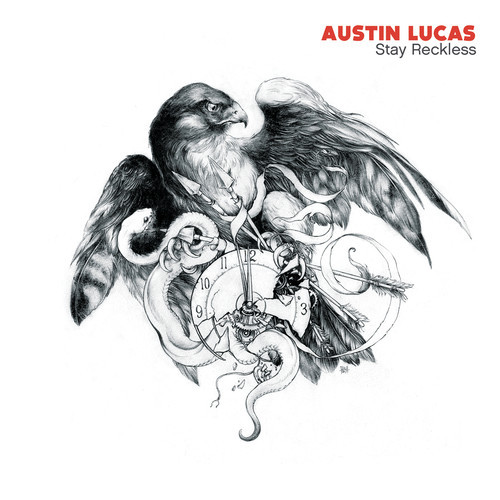 Are you as excited as I am about Arcade Fire’s reemergence?

Have you listened to the David Bowie-laced “Reflektor” yet? Have you tried out the song’s crazy webcam-enabled video? Did you hear that James Murphy of LCD Soundsystem produced AF’s upcoming album, a two-disc affair frontman Win Butler is billing as “a mash up of Studio 54 and Haitian voodoo”? I mean… there’s a lot to be excited about in there.

All that excitement bubbled over for me on Tuesday, when a limited-edition “Reflektor” 12-inch single went on sale at BK Music. So shiny. So limited in quantity. I just couldn’t help myself. I made the trip to Midlothian Turnpike and was successful (I still haven’t opened the thing, though — it’s too pretty), but oddly enough, I walked out of BK all amped up about something else entirely.

Bill, the store’s owner, thoughtfully remembered from my victorious Record Store Day post that I’m a Justin Townes Earle fan, and he recommended I try out Austin Lucas, a Bloomington, IN-born singer-songwriter who released a new album in August called Stay Reckless. Bill mentioned that there was something attention-grabbing about Lucas’ voice, and he wasn’t kidding.

There’s a timeless quality to the way Lucas sings, like you could just as easily picture him sitting down for a Tiny Desk Concert as you could picture him sporting a Nudie Suit and doing a duet with Loretta Lynn or Dolly Parton. The Americana-rooted styles of the songs on Stay Reckless vary just as widely, and while Lucas’ voice feels different on each one — sometimes ornamental, other times hushed and earnest, forceful at points in between — the album doesn’t feel schizophrenic or scattered. Instead, you get the impression that Lucas simply has lots of brushes to paint with, sort of like how the mantis shrimp has 16 color-receptive cones (we have three) and can see somewhere in the neighborhood of a bazillion colors.

I’ve posted a few sample tracks below — “Alone In Memphis,” “Four Wheels” and “So Much More Than Lonely” — but the track off the album I’d recommend most highly is called “Rings.” It ranks up there with the most gut-wrenching divorce songs I’ve ever heard, and while the subject matter is certainly woven into the fabric of country music, reading that “Rings” has an autobiographical element fills it with a potency that’s nothing less than haunting. Give Lucas a listen below and click here to buy Stay Reckless.

Austin Lucas — “So Much More Than Lonely” [Spotify/iTunes]