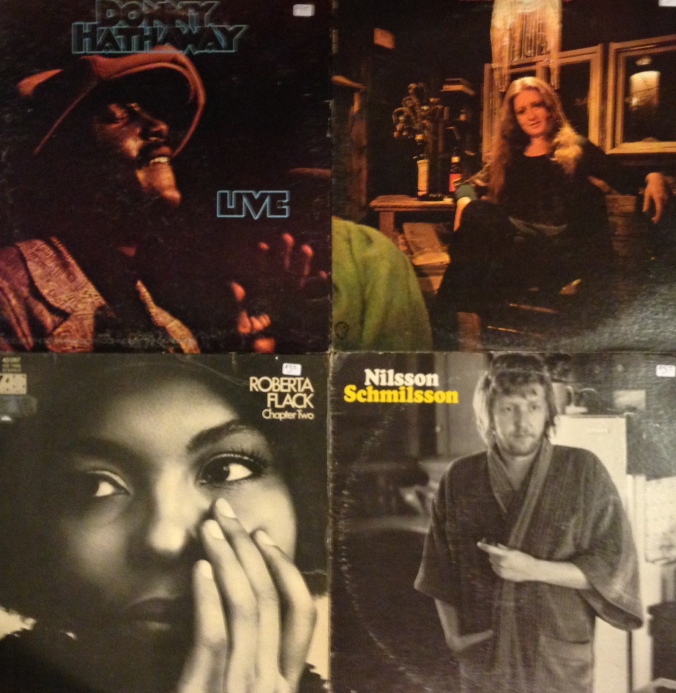 On Saturday, I stopped by Deep Groove Records and brought home the four used records pictured above. On Sunday morning, I played those four records while Mrs. YHT and I were making coffee and cooking brunch for some friends who were visiting from out of town. Forgive the superlative-speak, but I’m inclined to think it was the best Sunday morning of music my living room has seen/heard in the four years we’ve been in our house. A few words about each title:

I had no idea who Donny Hathaway was until Saturday. I solicited Chris at Deep Groove for some advice on whether to buy a reissue of James Brown’s (first) Live at the Apollo record, and we ended up talking about other great live soul albums, and how the best ones are packed with crowd participation. That’s when he dropped the Donny Hathaway bomb, and good lord am I grateful he did. This record is bananas good, with covers of John Lennon’s “Jealous Guy,” Marvin Gaye’s “What’s Going On” and a “You’ve Got A Friend” in which the audience all but commandeers the chorus. Not a bad way to soundtrack one’s first sips of coffee.

I’d been looking for a copy of Bonnie Raitt’s first album for two years or so. The way Raitt sings “slave” in the second verse of “Mighty Tight Woman” is what hooked me. It’s pitchy and awkward, but it’s my favorite moment on the album. You can almost feel her discomfort, sort of like how anyone with a soul who covers “I Got A Woman” gets a little queasy when it’s time to voice the line about “a woman’s place.” It’s one of those amazing humanity-shining-through moments that are as revelatory as they are impossible to script. Oh, and the rest of the album is fantastic as well.

By this point, I was in the kitchen making brunch, enjoying my first-ever trip through Chapter Two, and I can’t remember being so relaxed. We weren’t rushing through the cooking process, and Roberta certainly wasn’t in a hurry — her second record is a collection of gorgeous, downbeat ballads with cushy arrangements that seem like they take ages to unfold. (The pace of her “Just Like A Woman” cover is downright tantalizing.) In terms of pairing an album and an activity, I couldn’t have lucked out more, and while I wished it would never end, Roberta kindly wrapped things up just in time for us to sit down to eat.

I recently watched Who is Harry Nilsson (And Why is Everybody Talkin’ About Him)? on Netflix and would recommend checking it out, if you’re one of the people (I was) who has cause to ask the titular question. He’s a really interesting documentary subject, with tragic flaws and heroic talents that fight with one another for control throughout the film. I’m not sure that I’d re-choose Nilsson Schmilsson as brunch accompaniment (“Without You” feels a little melodramatic over bacon and eggs), but the album art and “Early In The Morning” certainly fit the occasion.

In an effort to relive Saturday morning, I’ve created a Spotify playlist, which you can access here. Give it a shot. I think you’ll find these to be 37 songs well worth winding through on a weekend morning. (I’ve also embedded a few favorites below.)

Roberta Flack — “Let It Be Me” [Spotify/iTunes]

5 thoughts on “A Sunday morning playlist”