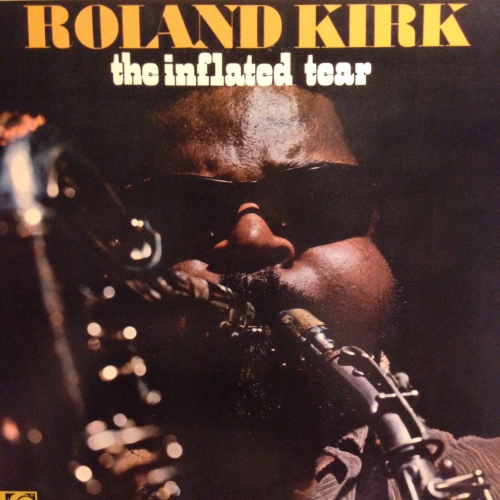 When life gives you lemons, you make lemonade. And then you pour some vodka in that lemonade, because stress and vodka are best friends, and Jesus didn’t invent vodka so we could sit around and watch it go bad, ya know?

Wait… what were we talking about? Lemons. Lemonade. Right.

Two things are going on right now. Thing 1 is that I went on a borderline-irresponsible record-buying spree last weekend that only partially involved Record Store Day’s Black Friday event. Thing 2 is that I have some non-YHT writing that needs to get done, leaving me less than the usual allotment of time for bloggishness. So I’m gonna do a series of quick hits on the stuff I picked up over the long weekend, starting with Roland Kirk’s The Inflated Tear.

I snagged it on Friday at Little Amps, a great, dual-locationed coffee shop in Harrisburg, PA that Record Store Day’s website listed as a participant in the Black Friday event. And while that last part didn’t turn out to be true, I loved the store’s smallish but extremely well-curated collection, which featured lots of cheap reissues like the one pictured above. (Nine bucks for a legendary jazz album on snazzy red vinyl? Works for me!)

I’d been waiting until the right moment to start exploring Kirk’s universe in earnest, and the Wikipedia description I read while sitting in a cozy armchair and processing a serious surplus of caffeine sealed the deal. This was the part that sold me:

One of his most popular albums and sometimes regarded as his magnum opus, it established his reputation as a jazz composer and earned him a modicum of respect in music circles who had previously written him off as a sideshow.

Get out of my head, Wikipedia! Years ago, I saw a YouTube clip of Kirk playing extremely dissonant music through two instruments at once, and while the simultaneous saxing seemed impressive, I couldn’t connect with the music. Not even a little. But the promise of a “magnum opus” drew me in this time, and now I see why so many people whose critical opinions I respect rave about the guy. The opening moments of “The Black And Crazy Blues” are so much calmer than I expected, yet his ingenuity and creativity are palpable throughout.

See what you think below.