It’s hard to believe, but year-end lists are starting to appear. I just saw Rolling Stone’s, which placed the U2 album at #1. OK then. My top-10 is in the works… sort of. I’ve been keeping a list of every new album I’ve listened to in full — first time I’ve done that — and I’ve made a spot in my living room for the albums released in 2014 that I bought on vinyl so I can give them a few extra listens. I’m certain this means they’ll get preferential rankings, but whatever.

While I’m in the process of making lists and checking them twice, I thought it would be fun to preview a few of the albums I’m looking forward to in 2015. You know what? “Looking forward to” is putting it mildly. I’m like a cat staring at a printer, impatiently waiting to grab what comes out. Here’s why:

The good press keeps rolling in for Natalie Prass. I loved this Pitchfork feature on her, though I didn’t love how short the snippet they posted of “It Is You” was. Quoth The Little Mermaid: “I want moooooooooore…” (Sorry, I’ve been singing Little Mermaid songs to Baby YHT lately. Last night she wouldn’t go to sleep, so it was “Look at this kid/Isn’t she sweet/Why won’t she give up and just go to sleep?”) In all seriousness, this album is poised to give Spacebomb a big victory and more well-deserved notoriety. I loved that Prass’ interview talked about some of the people behind the scenes and their collective dedication to process. I’ve written before about how this is music made the right way, and it’s incredibly heartening to see that acknowledged in such a prominent space. Given that I’m deriving this much fulfillment from an album after hearing just 2.1 of its songs (3.1, if “Anytime, Anyplace” is included on the album, which I desperately hope it is), I might as well go ahead and carve out a spot in next year’s top-10 list.

Natalie Prass — “Why Don’t You Believe In Me” [Soundcloud]

What a cool introduction to the new Trillions album this Good Day RVA video is. The song choice is perfect — “Right ‘Til Proven Wrong” kicks off with the kind of lead guitar wizardry that makes watching Charlie Glenn in person such a treat, giving people who haven’t yet seen the band live a glimpse of what they’re missing. If you fall into that category, you’ve also been missing some dynamite new songs. The good news is that the forthcoming album’s title — Superposition — suggests that the band will be everywhere at once in the coming year, so you should have lots of opportunities to see them perform. (I’ll have you know that this English major almost sort of totally kind of knew what that term meant before looking it up, which means I’m basically a scientist, right?) I have to admit that the success of Avers, to which Glenn contributes so brilliantly, had me a little worried about the Trillions’ fate. Now I know I needn’t have worried — it looks like 2015 is going to be a big year for them.

Have you heard “Take My Side” yet? I first heard it when Pitchfork posted a video of Will Butler (bandmate and brother of Arcade Fire frontman Win) performing the song live. It was one of those times when a song connects so directly and immediately that you think you already knew it, like it’s a standard you’ve heard a zillion times or a traditional song that people have been singing since the beginning of time. I love it — it feels elemental in a really neat way. Certain chord sequences feel both crude and sophisticated, like they’re being played by a garage band that stumbled across a progression that’s even more clever than they realize. (The lyrics have the same vibe: “If I could fly, you know I’d beat the shit out of some birds” made me laugh out loud.) But there are no accidents here — the song’s overall organization is studied and satisfying, with sections that excite and others that breathe and build back up. I haven’t heard anything else from Policy yet, but I have very high hopes.

Will Butler — “Take My Side” [Soundcloud] 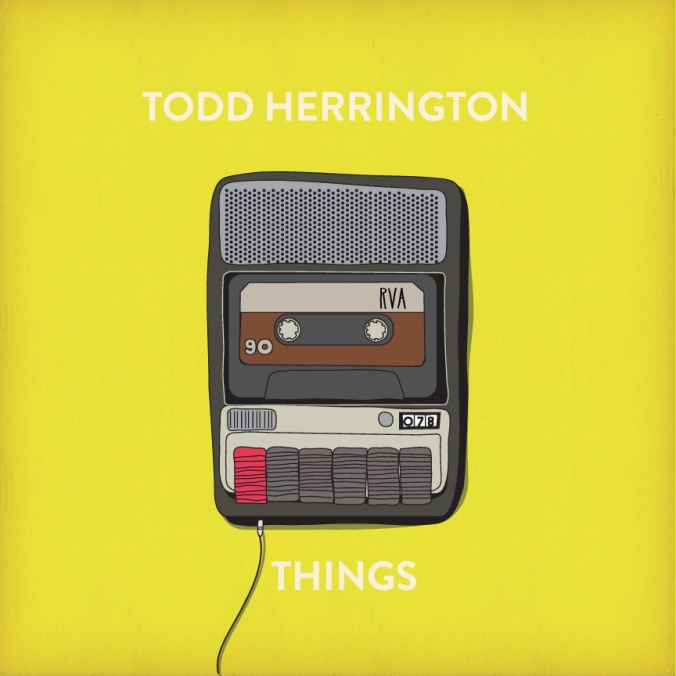 OK, so this one isn’t coming out in 2015. In fact, Todd Herrington first released it about a year ago, in December of 2013. However, it’s finally coming out on vinyl next week, and I suggest acting fast. I have a feeling they’ll go quickly. I’m not sure I’ve ever experienced vinyl FOMO this intense. It usually flares up around Record Store Day, but this is different. THINGS isn’t just a great album that’s infinitely relistenable. It’s also an important document — an artifact demonstrating how diverse, tightly-knit and talent-deep Richmond’s music scene is right now. I know that when I’m older I’ll want to remember this time in my life, and THINGS (fingers crossed I get a copy) will likely be a primary source for doing so. [Update: I forgot to mention that a release show is in the works! The Broadberry. Tuesday (December 9). Be there or be square/filled with regret.]

Todd Herrington — “Cool On The Side” [Spotify/iTunes]