Time to say goodbye to another Friday Cheers season. Sniff. It’s incredibly sad to think of how far off the next one is, but I figure I can suppress some of that longing by looking back at highlights from the shows I was able to make it to.

OK, so this category was rigged. Well, maybe not rigged — call it a foregone conclusion. I was thrilled when I found out Isbell was included in this season’s schedule (I believe my exact words were “Seeing Jason Isbell’s name just about made my head explode”) and it turned out to be extra meaningful because my daughter was there for her first Friday Cheers. She had a blast — crawling around, snacking on Cheerios, soaking in some of the best songwriting on planet Earth.

Quick story: My favorite moment from Isbell’s performance was almost my least favorite. He’s adept at drawing characters in his songs, but “Cover Me Up” contains deeply personal lyrics about his struggles with alcohol, and he cites Richmond as the end of the road for his drinking. It’s not the most positive light for a city to be cast in, and it’s extremely serious subject matter, so I was hoping the crowd would respectfully skip the customary “He just said the name of our town!” cheer. It did not. I cringed with the force of a thousand cringes. But a few moments later, when Isbell sang “But I sobered up and I swore off that stuff forever this time,” the crowd cheered even louder, and my faith in Richmond’s humanity was restored. Whew.

I have no idea what it was called or who wrote it — cover or original — but the last song in Sleepwalkers’ set was a blistering, screaming, screeching, tear-ass number that left the crowd completely faceless. Local hospitals were overrun with cases of ARRFM (Acute Rock-Related Face Melting). It was completely awesome. Further proof that Sleepwalkers are so skilled that there’s not a genre they can’t work in and work in well.

Most Prideful Moment: Showing off Butcher Brown to my in-laws

Mrs. YHT’s parents wanted to see what the fuss was about, so they came down from Northern Virginia for the June 19 Cheers — one I’d singled out as a must-see — and we got there in time to see the second half of Butcher Brown’s set.

You know that weird anxiety that comes with introducing music you care deeply about to a person you care deeply about? I had a little bit of that going on, since my father-in-law is as music-obsessed as I am, and it’s way more fun when we agree on bands. I needn’t have worried, though, because Butcher Brown did what Butcher Brown does — groove as creatively and intelligently as any band out there — and my father-in-law loved it. The whole night was great. Many thanks to Butcher Brown for making that moment so special.

This album refuses to stay off my turntable. In fact, I tweeted this the other night: 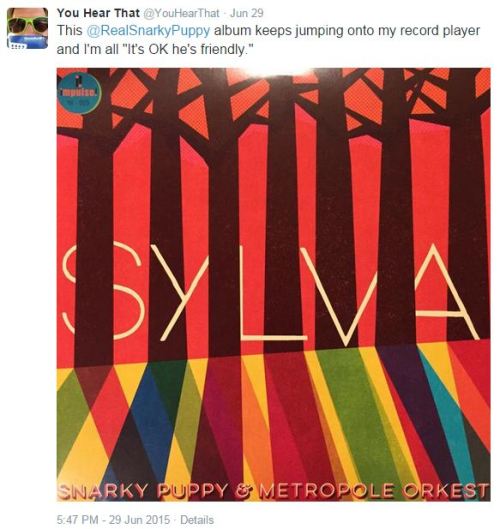 It was a little warped from the 90-degree heat when I got it, but both discs play great, and it’s so much fun getting lost in the grandeur of what Snarky Puppy and Metropole Orkest put together.

Joey is a hardworking dude. He’s everywhere — in more than one sense of the word. Not only is he at just about every show I’m at, he’s all over the place — near the stage, in the crowd, leaning over the Manchester Bridge railing to get a shot of the whole Brown’s Island scene… He actually makes your show experience better, because you can leave your crappy iPhone camera in your pocket with the knowledge that Joey will post high quality photos for your retrospective pleasure. I owe you a beer, Joey. Or 20.

I’m mostly including the Baby Banz so I can post this picture of my daughter wearing them:

We put the Banz on her both times she came to Brown’s Island, but she was pretty quick to take them off, and the volume was low enough for us to leave them off. The chairs were a bigger deal, because Mrs. YHT and I have crossed over into full-on adult concert mode — sitting down, hanging near the back of the crowd, worrying about whether the ground will be too wet for a blanket… The coup de grace, however, was having to find a spot to quickly but surreptitiously change a poopy diaper during Snarky Puppy’s set. A rock and roll moment for the ages, right there.

I already wrote about Moon Taxi’s “River Water,” but I was just as psyched for Son Little to play “The River.” Brown’s Island has a lot going for it — wide open space, the occasional passing train, a miraculous lack of mosquitoes — but the river’s proximity is really what makes the venue so special, and songs like “The River” make for these unforgettable, serendipitous moments.

That said, “The River” was just one reason I loved Son Little’s set. His is an understated brilliance — his guitar communicates mood as much as tonality, and the arrangements are sparse, leaving lots of open space. (Another way he complemented his Brown’s Island environs.) His drummer worked the same way — his kit was small, and he let the guitar and bass drive much of the rhythm, yet his fills brought in other genres like reggae and dub. Super fun. The three of them worked extremely well together — I’d seek them out if you weren’t able to make it to the Cheers season finale.

Listen to “The River” and newer Son Little song “O Mother” below, and join me in thanking and congratulating Stephen Lecky and the whole Friday Cheers gang for another job very well done. There are few things in life you can count on to surprise and entertain you on an annual basis, but Cheers is one of them.