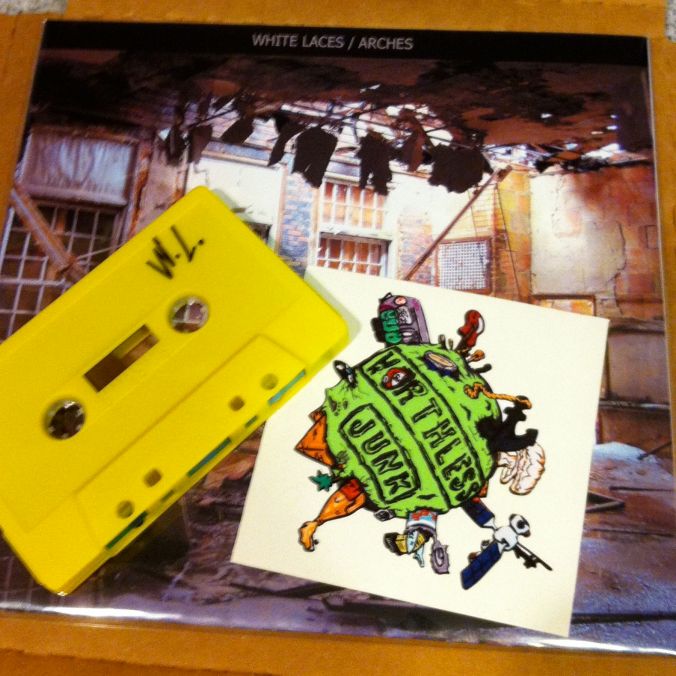 Last Sunday, I came home to find a very exciting and much-anticipated parcel sitting on my porch. It was a smallish cardboard box that enclosed 3 items: a Worthless Junk Records sticker, the new White Laces/Arches split 7″ and a yellow cassette with “W.L.” handwritten on one side and “AR” on the other. Because there’s a whole lot of awesome going on in this parcel, I’m splitting up my thoughts into two parts, starting with White Laces’ side of the record. Recorded at Mystic Fortress studio in Roanoke and etched into super-groovy colored vinyl, “Dissolve Into Color” is a wonderfully expressive song, and it bears one of the trademark characteristics that make White Laces so exceptional — the band’s unique ability to create sonic space, and lots of it. Doubled vocals and undulating guitars with elastic lead notes create a feeling of lateral movement that, when combined with driving, forward momentum-building drums and bass, pushes the boundaries of the song outward in all directions. Such spaciousness makes it easy to lose yourself in “Dissolve Into Color,” especially when it kicks into high gear during the instrumental buildup that comprises the final quarter of the song. Starting with just drums and two notes played back and forth on guitar, the crescendo builds and builds like a game of Jenga being played in reverse, until all the elements are in place, forming a massive-sounding structure that feels powerful and solid even as it maintains its elasticity. Another thing I love about this song is the brief epilogue that brings it to a close. After the buildup climaxes and several of the instruments drop out, the crescendo’s din temporarily remains, feeling less like an afterthought than a spirit that refuses to leave. This yearning piece of punctuation is just one of the many things “Dissolve Into Color” does well, and I encourage you to listen below, snag the record here, and check back for Part 2, in which I’ll take a look at Arches song “Late Last Night” and the mysterious yellow cassette.