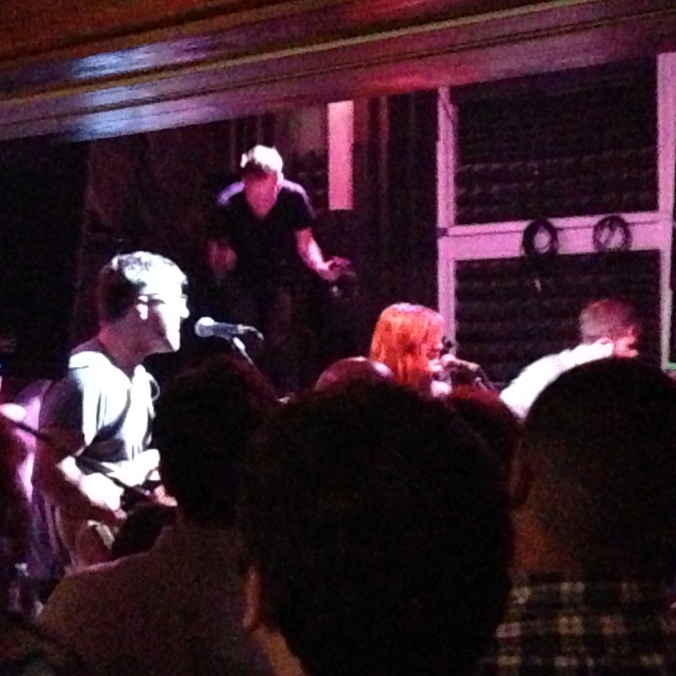 So as it turns out, trying to encapsulate my Fall Line Fest experience in a single post is preventing me from writing anything at all about it. That’s no fun. I want to share a bunch of pictures, I have a great video of No BS! Brass Band covering “Thriller,” there’s a cat story… it’s just too much to cram into a single serving. So I’m heeding the advice issued in The White Stripes’ “Little Acorns” and taking things one at a time.

My very first Fall Line Fest experience came via Kopecky Family Band, the Camel’s Friday night closer. I made it to the Camel just as the preceding act was tearing down — right on schedule, to everyone involved’s credit — which gave me the opportunity to watch the venue’s stage side clear, start to fill in again, and eventually become crowded with gold-wristband-wearing, excited, eager-to-sing-along supporters whose enthusiasm was rewarded handsomely.

While the highs of the show were certainly high (I’m speaking literally here — as you can see from the picture above, certain members of the band would climb things at particularly elevated moments), the quietest moments are the ones that have stuck with me most.

Vocalist Kelsey Kopecky explaining between songs that their idea of a “family” is meant to be inclusive, something that crosses borders and bloodlines and brings people together. Band members acknowledging and engaging audience members on an individual basis. Kopecky opening up to the crowd about efforts to maintain sobriety, before launching into an arresting “Change” duet with vocalist, guitarist and trombonist Gabe Simon.

I leaned in during that “Change” performance, but the full force of the song didn’t hit me until I listened to the album version later that night. (I failed to move over when the stage side of the Camel filled up, and lyrics tend to dissipate on the bar side.) I’ve listened to “Change” a dozen or so times since, and I’m posting it below because it still hasn’t stopped haunting me. For all the chant-starting, hell-raising joyousness Kopecky Family Band brought to the Camel that night, nothing topped this one song’s gentle but commanding presence.

Check out the studio version below and my blurry camera phone picture above, click here to buy Kopecky Family Band’s Kids Raising Kids album from iTunes, and check back for more Fall Line Fest fun.

One thought on “Kopecky Family Band”